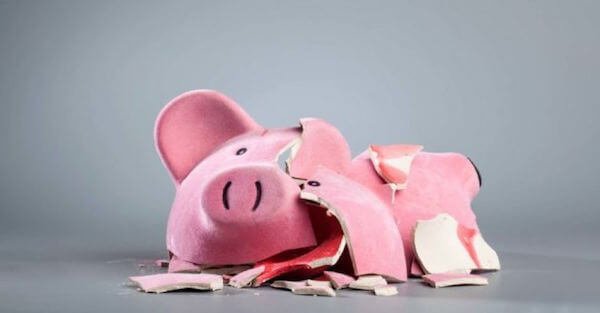 What I’m about to tell you isn’t some wild conspiracy. Or fake news.

It’s raw fact, based on publicly available data from the US Federal Reserve.

This data shows a very simple but concerning trend: banks in the United States are becoming less safe. Again.

And they’re doing it on purpose. Again.

Few people ever give much thought to the safety and security of their bank.

After all, banks go out of their way to instill an overwhelming sense of confidence that they’re rock solid.

They spend tons of money on ornate lobbies in giant buildings. They buy the naming rights to football and baseball stadiums.

And hey, they’re insured by the government.

But it turns out that none of these elaborate distractions means anything when it comes to bank safety.

Think about the business of banking– it’s simple. Banks take deposits, and then use that money to make loans and various investments.

For a bank, those deposits represent the amount of money they owe to their customers.

So obviously the total value of a bank’s loans and investments (i.e. its assets) should exceed its total deposits.

This is known as solvency. A solvent bank has SUBSTANTIALLY more assets than it owes in deposits.

That way, if a loan or investment goes bad, the bank will still be able to repay its depositors.

The other safety factor is liquidity, which basically means that, eventually the bank is going to have to give some of the money back.

Perhaps a depositor decides to initiate an electronic funds transfer to another bank… or makes a withdrawal at an ATM.

The bank should have sufficient cash on hand to be able to meet these needs.

Banks that lack proper liquidity can rapidly run into catastrophic problems, forcing them to fire sale assets in order to raise cash, which in turns could trigger a solvency crisis.

In both of these scenarios, solvency and liquidity, cash is king.

(Note that “cash” can mean both physical currency sitting in a vault, as well as a bank’s electronic deposits at Federal Reserve and other cash equivalents.)

For solvency, cash is about as risk-free as it gets.

Anything that a bank does with your money is going to carry some level of risk. Buying bonds. Car loans. Student loans. Business loans. Residential mortgages.

These all carry certain risk of default. Cash doesn’t.

So a bank with higher levels of cash will typically have much lower risk to its solvency.

Simultaneously, a bank with a strong cash position is also liquid, and hence more likely to be able to honor its customers’ transactional needs.

But that’s not happening in the Land of the Free.

The Federal Reserve’s most recent report on “Assets and Liabilities of Commercial Banks in the United States” published last Friday showed a continuing trend in the erosion of bank safety.

This is a weekly report, so there’s tons of data. And the trend goes back now at least 2.5 years.

Since late 2014, for example, Fed data show that total cash assets at US banks has been in steady decline, dropping roughly 25% over that period.

But at the same time, total deposits at the banks has actually increased around 15%.

So you can see the issue: cash is falling while deposits are increasing. This is the OPPOSITE of what a responsible bank should be doing.

A conservative bank seeks to INCREASE or at least MAINTAIN the level of cash it has on hand as a percentage of customer deposits.

Banks in the US have been doing the opposite– decreasing their cash holdings while deposits have been rising.

Proportionally, the aggregate cash-to-deposit ratio in the US has fallen by 32% since late 2014.

So what exactly have they been doing with that money, i.e. the money they should be holding in cash?

The truth is we’ll never know.

Banking is a giant black box. We are provided scant detail about what these people are actually doing with our money.

Sure, they’re making loans. But what loans? To whom? Are the borrowers creditworthy? Is there valuable, high-quality collateral? Does the interest rate make sense to compensate for the risk?

No one knows. Not even the banks themselves know.

When you have hundreds of billions (or even trillions) of dollars of assets on your books, it’s impossible to really know what you own.

So we’re basically all in the dark.

I’m not telling you this to suggest that there’s some major crisis looming or that you should yank all of your money out of the US banking system.

But it’s important to understand that banks are not as risk-free as they lead on.

This huge drop in the cash-to-deposit ratio is a conscious decision. It doesn’t happen by accident. Banks are choosing to hold less cash, i.e. be less safe.

(And the government which supposedly guarantees it all is itself insolvent to the tune of negative $60+ trillion. But that’s another story.)

Why take the chance? Why keep 100% of everything that you’ve ever earned locked up in a system that is actively making itself less safe…

… not to mention the industry’s uninterrupted history of fleecing its customers?

There are too many other alternatives out there.

You could consider transferring a portion of your savings overseas to a stronger, more conservative bank abroad.

Or you could become your own banker by holding some savings in physical cash in a safe at your home or a non-bank safety deposit box facility.

Cryptocurrency is an option (though you’ll have to stomach the extreme volatility for now).

Or even something as mundane as buying Amazon.com gift cards.

There are countless options to distance yourself from this system if you simply have the willingness to see the big picture.