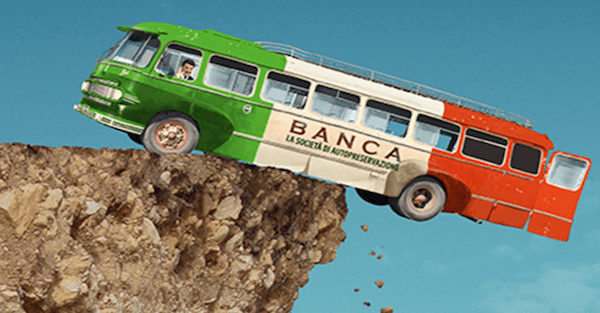 The Italian Prime Minister himself stated that depositors’ funds were at risk, so the government stepped in with a bailout and guarantee package that could cost taxpayers as much as 17 billion euros.

That’s a lot of money in Italy– around 1% of GDP. In fact it’s basically as much as the 17.1 billion euros they spent on national defense last year (according to an estimate by Italian think tank IAI).

You don’t have to have a PhD in economics to figure out that NO government can afford to spend its entire defense budget every time a couple of medium-sized banks need a bailout.

That goes especially for Italy, whose public debt level is already 132% of GDP… and rising. They simply don’t have the money.

Moreover, the European Union actually has a series of new rules collectively known as the “Bank Recovery and Resolution Directive” which is supposed to prevent failing banks from being bailed out with taxpayer funds.

Here’s the thing– Italy has LOTS of banks that are on the ropes.

So with taxpayer resources exhausted (and technically prohibited), who’s going to be on the hook next time a bank goes under?

Easy. By process of elimination, the only other party left to fleece is the depositor.

Here’s how it works:

Let’s say a bank takes in $1 billion in deposits.

Naturally the bank doesn’t just keep $1 billion in cash sitting in its vault. They invest the money. They make loans. They buy assets.

But sometimes banks screw up when they invest their customers’ funds. Loans go bad. Borrowers default.

For example, if a bank invested $200 million in Greek government bonds, and then the government of Greece defaults, the bank would only have $800 million in assets remaining.

But they’d still owe their depositors the full $1 billion.

How can a bank with only $800 million in assets possibly honor the $1 billion worth of deposits they owe to their customers?

They can’t. And there’s a word for this: insolvency.

This is the problem with so many banks across Italy (and many other countries around the world). They owe their depositors more than their assets are worth.

Again, the taxpayers are ultimately on the hook from this weekend’s bailouts, along with some subordinated bondholders who got wiped out.

But Italy’s banking problems go far beyond two little banks. This is a systemic issue across the country’s ENTIRE banking sector. And the solution goes far beyond what the taxpayers can afford.

So next time around it could very well be the depositors who end up losing money.

Even if not, it hardly seems worth taking the chance.

By the way, I’m not just talking about Italy here.

You know how they say “time heals all wounds?” Well, not in banking. Some wounds never heal.

And there are countless banks and banking systems around the world that never fully recovered from the 2008 crisis.

This raises the question– why hold money at a shaky bank in a country where the government is in debt up to its eyeballs? Especially when there are so many better options.

Most people never think twice about where they hold their savings, typically opening accounts based on some irrelevant anachronism like geography.

It’s 2017. Why trust all of your savings to a financial institution simply because it’s across the street?

If you run a website, you wouldn’t necessarily choose a web hosting company because it’s located in your home town. You’d find the best company with the best service and best uptime.

If you want to buy a new mobile phone, you wouldn’t just go to a local retailer. You’d probably shop online and find the best deal, even if it’s from a company across the planet.

Why should money be any different?

The world is a big place with LOTS of options and opportunities.

And there are plenty of places where the banks might have MUCH stronger fundamentals, located in jurisdictions with minimal debt.

But if this is too exotic, you could also consider physical cash.

This is all part of a great Plan B.

Clearly there are risks in a number of banking systems, including most of the West where the majority of governments are themselves insolvent.

Perhaps those risks are never realized.

But it’s hard to imagine you’ll be worse off for holding a little bit of physical cash… or to consider the option of holding a portion of your savings in a bank that’s conservative, well-capitalized, and located in a country with zero debt.

Even if nothing bad ever happens, there’s no downside in having taken these steps.

But if these risks do pan out, your Plan B will end up being the best insurance policy you’ve ever had.