This is how a “bail-out” becomes a “bail-in” 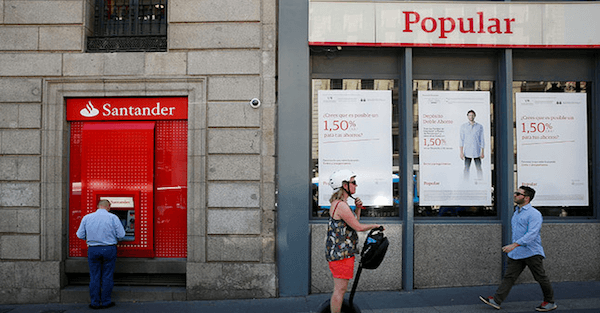 Here’s the perfect example of how insane our financial system has become.

It was announced yesterday that, after a 24-hour white-knuckled ride, Spanish banking giant Banco Popular had been sold to Banco Santander for the price of just 1 euro.

Banco Popular had once been one of Spain’s largest banks.

But just as certain banks tend to do from time to time, Popular sacrificed responsibility and good conduct for quick profits.

They spent years gambling their depositors’ savings away on idiotic, dangerous, pitiful loans. And those bad loans eventually came back to bite them.

The modern business of banking is all about pooling customer deposits together and making various loans and investments with those funds.

They maintain extremely high loan standards. And they keep a SUBSTANTIAL rainy day fund set aside in case those loans and investments go bad.

Banco Popular did none of those things.

Back in 2006 during the height of the real estate bubble, for example, Popular maintained a liquidity ratio of less than 2% according to its annual report that year.

This means that over 98% of its customers’ savings had been gambled away on bad loans and bad speculations.

Last year alone Popular lost 3.5 billion euros, which is about as much as they earned in all of the bubble years combined.

Fearing for the banks ability to continue servicing its customers, European regulators stepped in on Tuesday and forced a fire sale.

This means that Banco Santander will now inherit all the toxic loans (and consequent losses) that Popular had on its books.

The insanity here is that Santander had almost no time to conduct its due diligence, i.e. research the business to understand what they were buying.

Banco Popular had a balance sheet worth over $150 billion with hundreds of thousands of different loans.

It would take months to even begin scratching the surface of such a massive balance sheet.

By comparison, the last time I bought a business I paid $6 million and spent more than a year conducting due diligence.

Santander bought a $150 billion business and spent less than 24 hours trying to understand what they were buying.

This is nuts. And ENORMOUSLY risky for Santander.

But perhaps even more insane is that this deal is now being hailed by European governments and financial media as a wonderful solution to the looming problem of bank insolvency.

It doesn’t take a rocket scientist to understand that this problem wasn’t really solved.

It was just transferred from one bank to another. The assets are still toxic. They just happen to be owned by Santander now.

Most importantly, Banco Popular is FAR from alone.

Here in Italy, in fact, a number of smaller banks are teetering on insolvency.

And regulators have been scrambling trying to find potential suitors to copy this shotgun wedding ‘solution’.

But so far, no success.

Not a single bank in Italy has sufficient capital to absorb the toxic debts of another.

Plus the government itself is totally bankrupt.

So basically an insolvent government and insolvent large banks are trying to figure out how to bail out insolvent smaller banks.

And this is the important lesson: eventually they run out of options.

There’s no one left to bail out a bad bank… no taxpayers, no white knight, no bondholders, no shareholders. Nobody.

This is when a “bail out” becomes a “bail in”, and the depositors get stuck with the bill.

Bottom line: This matters. It’s your money at stake.

Don’t simply assume that your bank is in good condition. Examine their financial statements and find out for sure.

Don’t keep 100% of your life’s savings at a single institution. Make sure you diversify. If a bail-in ever occurs, it will be the largest depositors who get hit first.

And definitely consider diversifying geographically. Avoid keeping everything in the same country, especially if that country is bankrupt– the bail-in risk is much higher.

The world is a big place and there’s a ton of opportunity out there, including plenty of responsible, conservative places to bank.

And it’s hard to imagine you’ll be worse off because a portion of your savings is in a safe, well-capitalized bank.