Because it worked so well for Stalin… 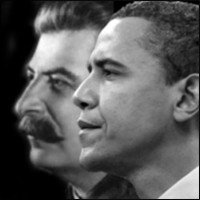 Five-year plans in the Land of the Free? Apparently it’s not that far off from reality.

In effect, Senator Harkin wants the President to centrally plan the economy. Never mind that the President has zero experience in business or manufacturing. But hey, this worked out so well for Stalinist Russia, it’s no wonder Mr. Harkin wants to copy that model.

Not to be outdone by Mr. Harkin’s long-sighted vision, President Obama is drawing up plans to turn over Americans’ financial data to the nation’s spy agencies. So now, on top of everyone else, law-abiding citizens in the Land of the Free can count on the CIA and NSA combing through their bank statements.

Of course, it’s all for your protection against men in caves who wish to do you harm.

This is the same reason they irradiate and/or sexually assault airline passengers. It’s why they have to be able to assassinate Americans on US soil by remote control plane. It’s why they’ve authorized military detention of US citizens. Etc.

When you step back and look at the big picture, it really makes one wonder– how big of a piano needs to be dropped on people’s heads before they notice what’s happening..?

I acknowledge that people have roots. I understand that folks can’t easily pick up and leave their jobs, friends, and family. I understand there’s a lot of inertia involved.

But if you see the writing on the wall, there’s so much you can do to protect yourself against this lunacy. Own precious metals, preferably stored overseas. Open a foreign bank account. Ship your retirement savings abroad. Travel a little bit. Know, in advance, where you would go if you finally hit your breaking point and needed to leave the country.

The trend is clear. Every single day the political elite gives us even more evidence that they’re working overtime to destroy the economy and what few remaining civil liberties still exist.

It’s a difficult truth to acknowledge given that most people have been brainwashed from a very early age in public schools to trust in their government. But placing any amount of confidence in this system utter folly. And dangerous.

There’s no need to panic; rather, it’s important to take measured, rational action. The above recommendations are not alarmist, they’re steps that make sense no matter what happens.

Yet it the bottom falls out, you’ll be one of the few people left standing. Unless, of course, you’d rather wait for the next five-year plan to kick in.