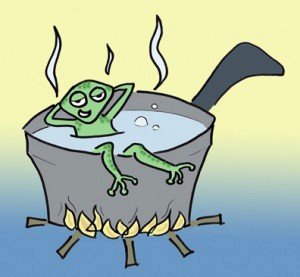 Folks… you just can’t make this stuff up.

On July 6th, just two days ago, at least a dozen busybody Congressmen sponsored the introduction of HR 2411, the “Reduce America’s Debt Now Act of 2011.” They always come up with fantastic names for these pieces of legislation… and rest assured, the better/more patriotic the name, the more ominous the bill. This one follows the pattern.

HR 2411 states that every worker in America should be able to voluntarily have a portion of his/her wages automatically withheld and sent directly to the Treasury Department for the purposes of paying down the federal debt.

“Every employer making payment of wages shall deduct and withhold upon such wages any amounts so elected, and shall pay such amounts over to the Secretary of the Treasury…”

That’s right. Uncle Sam is so broke that he wants to give all the good little Americans out there the opportunity to contribute an even greater portion of their paychecks to finance government largess.

Obviously, if an employee feels so compelled and should elect to have a portion of his/her paycheck withheld, the onus of responsibility is now on the employer to make it happen. The employer has to do all the paperwork, withhold the money, send the payment to the Treasury, maintain the account records, and probably submit to all kinds of new filing requirements.

You can imagine that, if passed, the bill will result in a host of new IRS regulations, complete with a battery of penalties for employers who don’t fill out the paperwork properly, submit filings on time, or make some administrative mistake.

Think about it: if a small business owner has one single employee who is dumb enough to think that it’s his patriotic duty to pay down the debt and decides to contribute $1/month, that owner will have the responsibility for all kinds of new forms and filings, plus submit to new ‘debt reduction audits.’

But don’t worry, it gets even better.

So let’s say there are millions of sheep out there who elect to donate a portion of their toil and sweat so that the Chinese and big financial institutions don’t have to worry about an American default. How does Congress plan on rewarding its most patriotic citizens? By sticking it to them on their taxes, of course.

HR 2411 stipulates that any contribution made to the Treasury in order to pay down the federal debt IS NOT TAX DEDUCTIBLE.

“The [Treasury] Secretary shall include. . . a reasonably conspicuous statement that any amounts deducted and withheld from wages. . .  are not deductible as charitable contributions for Federal income tax purposes.”

Imagine this scenario: You make $100,000/year. In a fit of complete insanity, you decide that you want to withhold your entire annual salary to pay down the debt. Hey, you can always move in with mom for the next year, right?

Well guess what– Uncle Sam will gladly take your money… and then STILL expect you to pay taxes on the $100,000 that you earned, so you’d have to come out of pocket with an additional $40,000 or so.

Don’t worry, though. The Social Security and Medicare wages are reduced by the amount that you withhold, making you only liable for state and federal taxes. Seems like a good deal, eh comrades?

There are so many things utterly wrong with his piece of legislation, it’s hard to know where to begin other than by saying that such intellectual and philosophical perversion is only capable of springing from unprincipled sociopaths whose sole capability is the destruction of value.

There’s a great quote from Atlas Shrugged that comes to mind which sums this all up:

“[W]hen you see that in order to produce, you need to obtain permission from men who produce nothing; when you see that money is flowing to those who deal not in goods, but in favors; when you see that men get rich more easily by graft than by work, and your laws no longer protect you against them, but protect them against you. . . you may know that your society is doomed.”

We’ve discussed the story of the boiling frog so many times before– a frog, when put into a pot of water and slowly brought to a boil, doesn’t realize that he’s in danger until its too late. I think the boiling frog just got a little hotter. Have you hit your breaking point yet?