What are the social implications of economic collapse?

For the last few days, we’ve been having an important discussion about the magnitude of the economic challenges in the west; if you didn’t read yesterday’s letter, I really encourage you to do so before proceeding because it’s important to understand why the west has truly passed the point of no return.

Simply put, the United States and much of Europe are borrowing an extraordinary amount of money now just to pay interest on the money they’ve already borrowed. They cannot even self-fund their mandatory entitlement programs without going into the hole, and their options are limited:

As long as the government CAN do this, they WILL do this.  Regardless of their intentions, though, more debt only worsens the situation, creating higher borrowing costs in the long run, and even more debt. As this happens, the pool of buyers begins to dry up, especially from overseas.

The more buyers stop purchasing Treasury securities, the more the Federal Reserve will mop up the excess liquidity. In doing so, the Fed essentially conjures up money and loans it to the government.

No matter what the government monkey statistics say, this is inflationary, plain and simple. The more money they print, the greater the level of inflation in the long-term. Meanwhile, as foreigners simultaneously reduce their US dollar holdings, this inflation will become more acutely felt in the US.

There’s going to come a time when the US government is forced to face its economic reality and make some incredibly deep cuts that would be felt across society, from Wall Street and the military industrial complex to project housing on the other side of the tracks.

Eventually, the debt burden is simply going to be too much, and the most obvious solution will be to default. Politicians will make China out to be the enemy and they will probably invent a war just to have an excuse to default on Chinese owned debt. Americans will wave the flag and celebrate defaulting on their enemies.

In the best traditions of Atlas Shrugged, the government will continue its persecution of the productive class– professionals, investors, entrepreneurs, and skilled workers. Existing taxes will rise, new taxes will be created, trade barriers will be enacted, and a maze of cost prohibitive regulations will be passed.

The first option (keeping the party going) is what has been happening for years. Politicians make small concessions to show they’re “serious” about fiscal discipline, cutting laughably small programs while dumping hundreds of billions of dollars into wars and entitlement programs.

In the longer term, only options 2-5 remain: inflation, austerity, default, and cannibalism. Each of these remaining options will shake the financial system to its core. More importantly, each of these has the power to create widespread social upheaval.

When inflation eats away at a family’s already meager standard of living, when austerity eliminates the benefits to which recipients have grown accustomed, when default vanquishes a retiree’s savings, when high taxes make workers feel like they’re just government serfs– this is when the real turmoil will begin:

There are a number of other manifestations, and many are already showing signs of emergence. The US and European police states are alive and well. Crime is on the rise.

Here’s the bottom line: all you have to do is glance at the headlines to see what happens when you strip people of their livelihood, of their ability to put food on the table for their families. 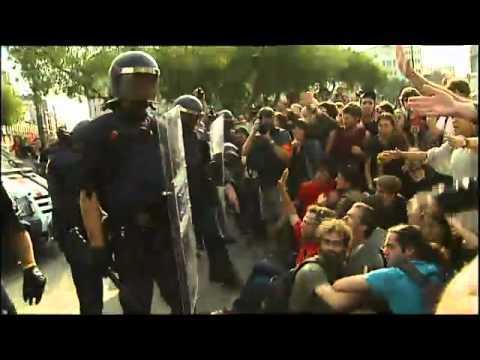 The US has been able to kick the can down the road with the most blunt social implications simply because the country benefits so much from a US-oriented financial system. This is coming to an end very, very quickly.

As a rule of thumb, the greater the economic distortion, the harder the collapse. The US economy has been in a fantasy world for so long, and when its dominant primacy is yanked away, the collapse will be at freefall speed.

Listen… I’m not talking about the end of the world here, I’m talking about difficult times ahead, and the things that go beyond economics. It’s time to face facts and look at how society will change (and has already changed).

Tomorrow, I’d like to write more about what we can do now. Meanwhile, please tell me what you think about this– how do you see society changing from this reset of the financial system?