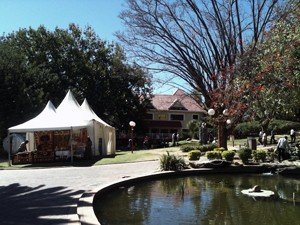 Whenever you eat at a street side cafe in a developing country, it’s always best to order an extra plate of French fries.That way, as people come around asking you for money, you’ll have plenty of finger food to give away. No more wondering whether the chap is actually hungry or just shilling. People who are truly down on their luck will take food over spare change, happily. And everybody loves French fries.

At lunch today in Windhoek’s surprisingly chic city center, I did just that– ordered an extra plate of fries. So when two young men walked up and asked me ‘for a minute of my time’, I slid the plate forward and gestured for them to help themselves.

Puzzled, they said, “Um, we’re reporters. We’re asking people around town about their opinions for a story we’re working on…””Oh.” I was a little embarrassed, not exactly sure what to do with the French fries at this point. “What’s the story?”

“As you’re probably aware, next week is World Democracy Day, and we’re asking people their opinions about how democracy has improved the world.”

Now I was the one who was puzzled. Who on earth is honestly aware that that World Democracy Day is next week? Or that such a day even exists? Or why it exists to begin with?

“My friend,” I started (people in Namibia commonly call each other ‘my friend’), “I’m definitely not the right guy to be answering this question… my views are a bit too radical.”

He laughed. “MY friend… We’re in Africa. What do you think ‘radical’ means here?”

He had me on that one. And so the discussion began. I explained to my new friends that democracy is a total fraud, a charade to make people think that they have control.

All over the world, political hopefuls pound the campaign trail whipping voters into frenzied ecstasy like a group of howling lapdogs. There’s never a rational discussion about actual plans… just high-sounding bombastic talk masquerading as substance.

Then the guys get in office. They wage wars. Drop bombs. Spend like drunken sailors. Indebt future generations. Pollute the currency. Spy on citizens. Radiate travelers. Suspend the rule of law whenever it suits them. And in short, they do nothing that they promised.

Curiously, voters are always surprised when ‘their guy’ never turns out to be the principled leader they voted for… as if this doesn’t happen after every single election.

Of course there’s always somebody else to blame. The other party. Evil terrorists. The Chinese. Rich people. Rich Chinese terrorists who belong to the other party. And so, with blame appropriately assigned, the same cycle of frenzy and folly starts right over again at the next election.

Meanwhile, unelected central bankers who are accountable to no one play God with the economy… destroying their currencies and the functions of the free market along the way.

Ironically, while my friends and I were engaged in this discussion, European Central Bank president Mario Draghi (one of the aforementioned unelected false gods) was telling the world that he would indefinitely continue printing money in unprecedented quantities.

This is what passes as democracy today, and it is not something that should be celebrated. Because any government, whether a democratic republic or anything else, is based on the principle of awarding a very tiny group of people nearly unlimited power– to kill, steal, start wars, control the money supply, etc.

These are powers that no single person or small elite should have. Yet it comes with the territory in every system of government, awarded to people whose only qualification is their desire to control others. The only difference is that, in a democracy, people cling to an illusion that they’re free.

This deceit is definitely not something to celebrate… or participate in… or reflect on how it made the world a better place.

Human beings are one of the most adaptable species on the planet. We don’t need masters telling us what to do or how much freedom we can have. And the truth is, it doesn’t have to be that way.

If you’re not free, you can get free. It’s only a matter of a few basic steps, and a change in thinking. More to follow.