Today I found out first hand how much Chinese are looking to avoid taxes.

I attended a conference today sponsored by the government of Labuan, Malaysia at the Grand Hyatt here in Shanghai.  Labuan is Asia’s newest financial center, and the government there is heavily courting wealthy Chinese investors and businesses to migrate their capital.

There are a lot of rich Chinese businessmen who are looking for a way to reduce their tax burden, and most don’t have a clue where to begin. This conference was a significant step in educating high net worth individuals, as well as their advisers, on the advantages of proper offshore planning.

Christine Verone, my local contact and old friend here in Shanghai, pulled some strings to score us some tickets. We were nearly the only white people at the conference… but her insider connections have paid off because the contacts I could turn out to be priceless. 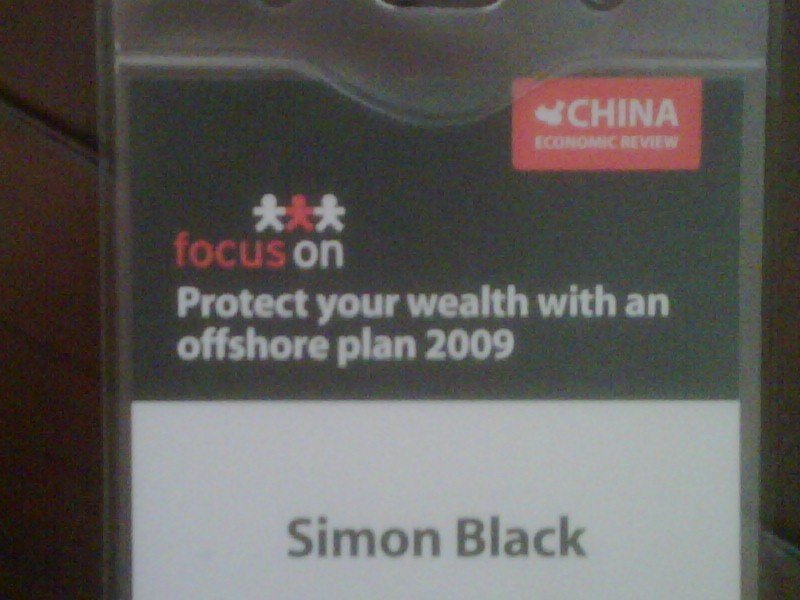 Labuan’s key principals gave presentation after presentation, highlighting the benefits and advantages of doing business there. Christine and I were able to meet with many of them in a more intimate setting after the conference to get the real scoop on how things work.

Quick overview: Labuan is a federal territory of Malaysia– essentially an independent state with its own laws but protected by the sovereignty of Malaysia… replete with access to the double taxation agreements (69 of them), common law standards, and easy access to Asia’s key markets.

Naturally, like most other low tax jurisdictions, Labuan levies essentially no tax for most companies with non-Malaysian sourced income… no income tax, no stamp duties, no withholding tax, no dividend tax, no service fees, etc. Even salaries paid to company directors are not taxable in Labuan.

Consequently, the jurisdiction is becoming more popular with Asian businesses. For example, Air Asia, one of Asia’s low cost carriers, bases its operations in Labuan.  According to the company CEO, this decision saves the airline millions of dollars each year and affords it the opportunity to keep fares low and stay competitive.

But this is all standard stuff for low-tax jurisdictions. Labuan excels in other areas, and this is why you should really care:

– ANYONE can open a bank/brokerage account there, and the process is incredibly simple and transparent. In the time it takes you to open an account in Hong Kong, you can probably open 100 accounts in Labuan. Nearly every sophisticated banking institution in the world now has a branch in Labuan, and they have actual professional bankers staffing the branches, unlike Seychelles, Cayman Islands, etc. where you get a bunch of ninnies in monkey suits.

– Labuan is part of Malaysia. Malaysia is a Muslim country in Asia. This puts Labuan effectively under both the Chinese umbrella and the Middle East umbrella, making it extraordinarily easy to raise money and providing geopolitical independence that other low-tax jurisdictions do not have.

– Unlike other ‘name plate’ jurisdictions like BVI where lawyers churn out companies simply to avoid taxes, Labuan incorporation agencies provide a full suite of cost-effective back office services to fully staff operations with qualified employees.

– Brokerages set up through Labuan trust accounts provide access to all of Asia’s financial markets with nearly unbreakable protection against creditors.  Setup costs are roughly 1/3 as much as Hong Kong.

– Like Singapore, raising money for start-ups is much easier in Labuan than other jurisdictions because of the availability of capital. Banks are awash with money, and structuring a tax-advantageous fund is a relatively uncomplex procedure there.

Based on the contacts that we made today, I will be having further discussions with many key principals in Labuan to explore the full range of services that these lawyers, trust companies, and private bankers offer.  In my opinion, for anyone with significant international operations, Labuan is definitely worth looking into.