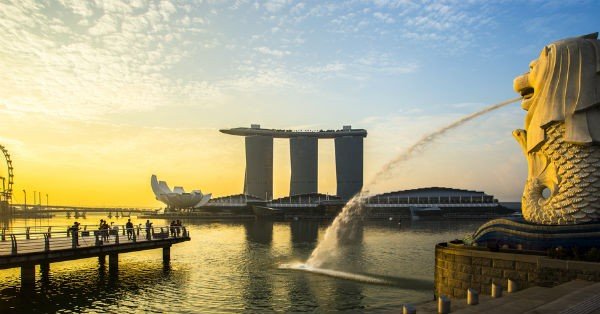 Well, at least someone gets it.

While just about every other central bank on the planet is giving everyone two thumbs up on the economy, the deputy chair of the Monetary Authority of Singapore (Lim Hng Kiang) said last night at a dinner that “an uneasy calm seems to have settled in markets” and that “we remain in uncharted waters.”

It was pretty amazing, really, to see such pointed language from a central banking official.

Mr. Lim jabbed at the “obvious” risks and said there would be “bumps on the road” ahead. That’s putting it mildly.

Warren Buffet once said that ‘only when the tide goes out do you discover who’s been swimming naked.’ (In my mind he says it like ‘nekked’ but I seriously doubt he pronounces it that way…)

That’s exactly what happens in severe financial crises. You find out which banks have been playing it safe… and which have so mind-numbingly stupid it’s a miracle they’re still around.

There are a number of ways to judge how safe a bank is. One way is by looking at its liquidity; my preferred metric is to calculate how much cash a bank has on hand as a percentage of customer deposits.

Note- this doesn’t mean physical currency, as in bricks of paper cash stacked up in a vault. Those days went away long ago. I’m talking about electronic currency– typically deposits with central banks.

The more cash a bank has on hand, the safer it is. Because in a financial crisis, people tend to panic (hence the crisis) and want to withdraw their money.

Banks bleed cash. And if they don’t have enough of it on hand, the bleeding turns into a sucking chest wound.

It’s at this point that they’ve been caught red handed swimming naked, and they need to go raise cash from somewhere, anywhere else.

So they start selling assets– loans, securities, and even shares of the bank itself.

But this is not an orderly liquidation in a well-functioning market. It’s a distress sale brought on by a full blown crisis. Asset prices are collapsing, fear has taken hold, and it’s difficult to find a buyer.

You never get full price in a crisis (unless you’re Goldman Sachs and can call up your BFF the Treasury Secretary). So in the process of raising cash, banks end up taking heavy losses on their balance sheets.

Now, banks that have healthy balance sheets will be able to withstand these losses.

But banks with razor thin capital ratios (i.e. a bank’s net equity as a percentage of total assets) will fold. Or go to the taxpayer with their hats in their hand claiming to be too big to fail.

This is precisely what happened to the US financial system back in 2009. Lehman Brothers. Wachovia. Washington Mutual. Etc. They were all swimming naked, with very little liquidity and miniscule capital levels.

Singapore’s monetary authority is obviously concerned about financial markets. They understand that you can’t expect to conjure trillions of dollars out of thin air without creating epic bubbles and even more epic consequences.

Sure, you can shuffle those consequences out a few months… even a few years. But at some point those bubbles must be reckoned with.

Perhaps the greatest concern is how few people seem to care.

Central banks and institutional investors turn a deaf ear to obvious risks and fundamentals that are screaming out in desperation hoping some conservative steward will notice that we are tap dancing on a knife’s edge, where nearly every single financial market is simultaneous at/near an all-time high, and central bankers keep pumping money into economies that they claim to be ‘recovered’.

This is the ‘uneasy calm’ that Mr. Lim discussed– a prevailing attitude that there’s nothing to see here; keep calm and buy the all-time high.

And he’s telling banks to get ready for something to happen.

Curiously, Singapore’s banks are already better capitalized and more liquid than most western banking systems. Back in 2008, Singapore demonstrated a lot of resilience as a financial center, sidestepping most of the problems with zero bank failures.

But for a country that went from third world to first world in just a few decades, complacency is not a cultural norm.

According to Mr. Lim, Singapore’s experience with the 2008 crisis “shows how the buildup of risks can severely destabilise even the most developed and sophisticated financial markets.”

So he wants them to increase their capital and liquidity even more.

If a senior official presiding over one of the world’s safer banking jurisdictions wants his banks to become even safer, a rational person would certainly wonder– “What do these guys know about the financial system that I don’t?”

They must be expecting the mother of all busts.