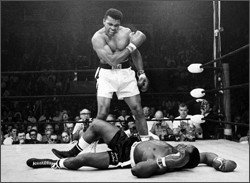 Have you ever done something really stupid, just because you were in love? Something you look back on and cringe, thinking “why on earth did I do that?”

Of course. Who hasn’t?

Fear. Love. Panic. Exuberance. Jealousy. Desire. These emotions have tremendous influence over human behavior. And when they kick in, they skew our judgment and cause us to do things that can only be characterized as highly irrational.

In the world of economics and finance, they call this ‘sentiment’. Consumer confidence, business confidence, investor confidence… these are basically emotional readings. Screw the numbers. To hell with the truth. It’s all about how people feel.

Yet the numbers tell a completely different story.

In the US, politicians are celebrating their accomplishments that the US unemployment rate has declined to 7.6%.

Of course, the real figures show that the labor force participation rate (effectively the percentage of society that they consider to be in the work force) has just hit a 30-year low. And the economy is failing to create new jobs.

Perhaps most of all, the US debt level this year will hit the danger zone that Greece was in just a few years ago when the European debt crisis kicked off in earnest.

In Europe, the situation is so bad that even the government figures are dismal. Italy is officially in a deep recession. Spain is posting a public deficit over 10% of GDP. The Greek economy shrank (officially) nearly 6% last year. Etc.

Bottom line, the numbers don’t match up with sentiment at all. And this makes for precarious investment conditions.

Over the first quarter of this year, US stock mutual funds reported $52 billion in retail investment inflows, according to market data firm TrimTabs. This is the highest inflow in a decade.

In January of this year, retail investors poured a record $77.4 billion into the stock market. To put this in perspective, the prior record, set in February 2000, was $23.7 billion.

You can probably guess how that turned out. This whoosh of money into stocks happened mere months before the crash.

Something just doesn’t add up.

Investors are throwing caution to the wind right now… ignoring the basic fundamentals and focusing exclusively on euphoric sentiment. (Or central bank policy).

Some of you may know that I was a competitive fighter for a number of years. I can personally attest, and any boxer will tell you, that it’s the punch that you don’t see coming which knocks you out.