The next domino: Australia doubles tax on retirement savings 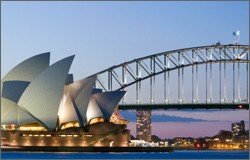 Though Australia’s national balance sheet is comparatively quite strong, the government has been running at a net deficit for years… and they’re under intense pressure to balance the budget.

The good news is that Australia now has a goodly number of investor-friendly immigration programs designed to bring productive foreigners into the country, similar to the trend we’re seeing across Europe.

On the flip side, though, the Australian government has just announced new rules which penalize citizens who have responsibly set aside savings for their own retirement.

Any income over A$100,000 drawn from a superannuation fund (the equivalent of an IRA in the United States) will now be taxed at 15%. Previously, all such income was tax-free.

The really offensive part about this is that the government is going to tax people’s savings ‘on both ends,’ meaning that people are taxed on money they move INTO the retirement fund, and now they can be taxed again when they pull money out.

The Cyprus debacle drew a line in the sand– fleecing people with assets, or income, in excess of 100,000 dollars, euros, etc. is now acceptable. This is the definition of ‘rich’ in the sole discretion of governments.

As you may know, US tax code allows for several different types of retirement accounts… and there has been a lot of talk lately about a ‘Roth conversion’.

This is to say that a US taxpayer can convert his/her traditional IRA to a Roth IRA. And the implications are enormous.

A traditional IRA is not taxed on the way in, but it’s taxed on the way out. So if you contribute $3,000 annually to your IRA, you won’t pay income tax on that $3,000. But the accumulated retirement savings is taxed in the future when you withdraw the funds at retirement.

Conversely, contributions to a Roth IRA are taxed each year with the rest of your income. But the accumulated savings are NOT taxed when you withdraw the funds at retirement.

Congress was essentially saying, “We promise that we will only tax you now in exchange for not taxing you later.”

It certainly begs the question: How much do you trust your government?

If the Australian government can unilaterally change the rules and start double-taxing retirement accounts, so can the US. And the trillions of dollars in retirement savings in the Land of the Free is far too irresistible for them to ignore.