This is what banks do when they go broke 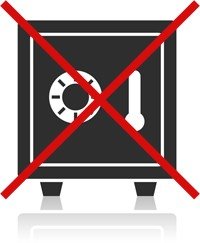 It’s happening again. This time HSBC branches in the UK are putting limits on customer withdrawals.

Bank employees there have been telling customers that they first must demonstrate to the bank’s satisfaction WHY they want to withdraw their own money. The bank has simply decided in its sole discretion that it won’t give people their own money back.

This is positively revolting– a breach of a most sacred form of trust between a bank and its customers. It would have been unthinkable just 10-years ago. But today it’s par for the course.

Banks across most of the ‘developed’ world have razor thin liquidity and capitalization ratios—meaning that their margins of safety are extremely low.

This is ultimately what’s happening to HSBC. It turns out their UK operations are in severe financial trouble, posting a major capital shortfall of over $100 billion.

This should come as no surprise. Less than a year ago, in response to how poorly capitalized British banks were, the banking regulators announced that it would allow banks to use creative accounting to boost their numbers.

In one method that was explicitly condoned by regulators, banks were authorized to count FUTURE earnings (i.e. profit that they may or may not earn in years to come) towards their capital TODAY.

It’s like calculating your net worth based on how much you -think- you might be earning 20-years from now.

This is fraud, plain and simple. And I wrote about this numerous times last year.

Of course HSBC is not alone. With few exceptions, most banks across Europe are in a similarly precarious position– highly illiquid and thinly capitalized.

This isn’t rocket science– it’s what broke banks do. We saw what happened in Cyprus last year when banks got “bailed-in” by their customers.

We’re seeing similar restrictions on cash withdrawals in Italy where the amounts are even much lower. Banks in the US have recently started imposing restrictions on international wire transfers as well.

To anyone paying attention, the warning signs are all flashing red.

The days when you could simply assume that your bank is healthy, and a safe custodian of your money, are long gone… and people need to be aware of this.

There are consequences to keeping funds in overstretched and starved-out banking systems. When push comes to shove, those banks will either go under and take your deposits with them (Cyprus), or they’ll make it incredibly difficult for you to access your own money. This is what HSBC is doing in the UK.

Fortunately, not every jurisdiction is the same.

I’ve written, for example, about the strong liquidity and solvency of the banking system in Norway numerous times, where there is enough cash in the banking system to back up 25.5% of customer deposits as of Q3/2013. In Singapore, it’s 24.7%.

Even HSBC as a global bank isn’t the same everywhere. Its UK division might not be worth much, but its Hong Kong operation enjoys a solid 25.9% liquidity ratio. This is nearly an order of magnitude higher than its peers in the West.

There are a lot of options out there. And it’s definitely time to start thinking (and moving your money) in this direction. Otherwise it could be you who wakes up tomorrow to find out that your bank is holding your money hostage.