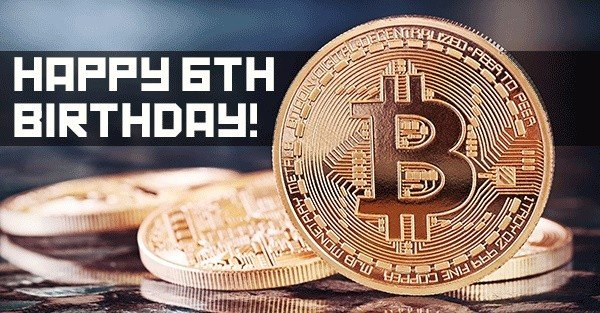 Six years ago today, Satoshi Nakamoto, the developer and founder of Bitcoin sent ten units of the cryptocurrency to his colleague Hal Finney as a test.

This was the very first bitcoin transaction ever recorded. And it may possibly go down as one of the most important financial transactions in modern history.

I should caveat this by saying that I am not necessarily a ‘Bitcoin-bug’. But the reason I own bitcoins is because I am even less of a paper bug.

Centralized, un-backed paper currency is one of the worst experiments in the history of finance.

We have awarded total control of our money supply to a tiny elite of unelected bankers that has the power to conjure trillions of units of currency out of thin air in its total discretion.

It has left in its wake an endless trail of busts, panics, recessions, and depressions, not to mention the greatest level of financial inequality that the world has ever seen.

Now– inequality is nothing to gripe about. Equality in and of itself is an absurd ideal.

Human beings are all different. And wherever one person’s skills are more economically valuable, that person will achieve greater wealth.

It’s a simple calculus. Improve the skills to improve the income.

But what this centralized paper monetary system has created is an environment where people rise to the top, not through skill and talent, but by graft and bloodline.

If you were born middle class, you stay middle class. You keep fighting to make ends meet, you keep going into debt, and you keep getting penalized with negative interest rates for saving your money.

And if you were born rich, you stay rich… even if you’re a complete moron.

This is banana republic stuff, brought to you by an absurdly corrupt monetary system.

The idea of Bitcoin changes all of that.

Understandably, most people don’t get it. It’s too technical. And a lot of folks can’t conceptualize what a ‘digital’ currency even is.

But consider this: US dollars. Euros. Pounds. Canadian dollars. Yen. Renminbi. These are themselves nearly digital currencies.

The vast majority of dollars aren’t found in paper form in your wallet and purse. They exist as digits… merely entries in an electronic ledger at a bank.

When you send a wire transfer from one bank to another, it’s not like some guy with a satchel full of paper cash treks across country to make a deposit. It all happens in the digital world.

So in this respect, the concept of digital currency is not terribly esoteric.

What really makes Bitcoin revolutionary, though, is its Decentralization.

No one has any control over it. No one can manipulate its supply. No government can destroy it.

And NO ONE can use it as a tool to reward bankrupt governments at the expense of responsible savers.

This is an extraordinarily noble idea: take the power out of the hands of the central banks and let the market decide.

But while Bitcoin does have a well thought-out design to implement this concept, there are plenty of weaknesses.

For one, the blockchain (Bitcoin’s underlying digital ledger system) keeps growing; it’s already 30 GB in size, and we haven’t even scratched the surface of the tip of the iceberg.

Imagine how large and unwieldy it will be in another six years.

This means that transactions (which can already take several minutes) could get even slower, and validation could require even more computational intensity and energy.

Security is also still an issue, as evidenced by last week’s breach on the Bitstamp exchange, which resulted in $5.4 million of cryptocurrency being lost.

But these weaknesses only spell opportunity to improve. They are lessons to be incorporated into the next generation of cryptocurrency and related services.

So regardless of whether Bitcoin remains the most popular digital currency, it started what will certainly prove to be a revolution of money.

Bitcoin is proof that all of the tools and all of the technology already exists to divorce ourselves from our corrupt monetary system.

We don’t have to own paper currency. We can hold gold or bitcoins.

We don’t have to use an insolvent banking system. We can transact through the Blockchain.

We don’t have to lay down for bankrupt governments desperate to steal everything from their citizens. We can move the entirety of our liquid assets into the digital world.

Whether you understand the technical specs or not… whether you are suspicious of digital currency or not… I hope we can at least agree that this is a powerful ideal.

And it’s one that isn’t going away.

As much as they’ll try, governments and central banks cannot stop this technology. The revolution has already begun.