Ron Paul + Jim Rogers on the government: “They’ll use force and they’ll use intimidation…”

The world is truly an enormous place… and, despite the dearth of good news and positive trends out there, I still see a lot of amazing opportunities in my travels.

But it’s really important to remain grounded about the challenges that face us. As I pen this letter to you, in fact,

– The NSA’s Utah data center, which will intercept every phone call, email, and tweet sent across the Internet, is nearing completion.

– The Marketplace Fairness Act, which will create additional sales taxes on US-based Internet transactions, is set to pass the Senate next week.

– The government of Cyprus just passed the final bail-in measures, officially authorizing the direct confiscation of people’s savings in that country’s banking system.

– The Bank of Japan recently announced its intentions to double down on their already unprecedented money printing operations.

– Not to be outdone, the US Federal Reserve just announced that they will maintain their Quantitative Easing program, which dilutes the existing money supply by more than $1 trillion annually.

– At $16.83 trillion, the US federal debt is at a record high and set to breach $17 trillion early this summer.

These are clear warnings signs that a rational person simply cannot ignore.

Bottom line, nations are going bust. And the worse things get, the more desperate their tactics become.

This isn’t the first time that the world has been in this position. This time is not different.

History shows that there are serious, serious consequences to running unsustainably high debts and deficits. And those consequences have almost invariably involved pillaging people’s wealth, savings, livelihoods and liberties… either directly or indirectly.

And in case it still weren’t obvious, I’d like to present Ron Paul and Jim Rogers, speaking together at our event in Chile a few weeks ago, with their own views on the situation. 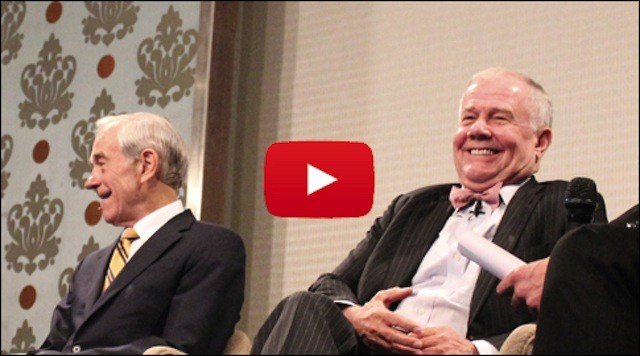