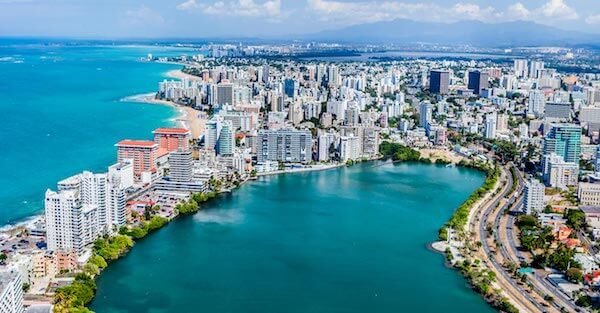 I’ve been on the ground in Puerto Rico over a month now.

And let me tell you, Puerto Rico has it all… The good, the bad, the ugly, and the amazing.

Technically, Puerto Rico is part of the US. If you drive around, you’ll see all the normal stuff from the mainland, from Cheesecake Factory to Costco. Amazon also delivers to the island. It takes a bit longer, but you’ll get what you ordered. So, it’s all quite familiar.

But there’s still plenty of bad…

There are enormous parts of the island that are horribly run down.

Puerto Rico is still reeling from a massive debt default and recovering from last year’s Hurricane Maria. And because the island doesn’t have a robust economy, the recovery is going to take a long time.

Yet despite the fact that Puerto Rico has been suffering a major economic crisis, property prices here can be shockingly expensive.

Due to last year’s hurricane damage, low-cost housing is in short supply… so prices and rents have increased quite a bit.

This is one of the reason so many locals are leaving the island—a lack of safe, clean, affordable housing, along with minimal job prospects.

At the higher end of the real estate market, prices can be completely absurd.

Right now I’m living in place called Dorado, which is a highly developed luxury enclave where tens of thousands of people live.

It’s got great schools and there’s a new Johns Hopkins hospital that’s going to be built, specializing in pediatrics and cardiology. They definitely know their target market.

Within the Dorado country club, the Ritz Carlton has a high-end residential development, where you have access to restaurants, beach clubs and golf courses

But, again, that luxury comes at a cost.

For example, someone just offered to sell me their condo… for $7 million.

That’s by far one of the most outrageously expensive deals I’ve ever been offered… and a stupid amount of money to pay for a condo… anywhere. Especially in Puerto Rico.

For that price, you could buy an amazing spot in London or New York City and still have $1 to $2 million left over.

Most of the rest of the island is still run down. And you’ve still got to deal with poor infrastructure and occasional power outages.

There are some pockets of good quality in Puerto Rico that aren’t obscenely expensive.

You can buy a condo for a few hundred grand and actually make a reasonable return renting it out.

There’s another neighborhood, a short drive from the center of Condado, where several of our Total Access members have bought apartments in a condominium complex, called Ciudadela.

It’s a well-developed (albeit small) area with its own shopping, restaurants, and residential living space, complete with a gym and 24-hour grocery store.

Overall, though, Puerto Rico doesn’t offer a lot of value in real estate… for now.

But I do expect to see real estate prices come down dramatically on the island, just as I do in the mainland and other parts of the world like Hong Kong and Australia.

Puerto Rico is battling a 10-year economic depression at a time when the global economy is poised for a downturn.

Banks here are sitting on a lot of bad loans already that they haven’t been able to liquidate due to a moratorium on foreclosures.

Once they start doing so, I think there’s going to be a substantial drop in real estate prices.

So with a little bit of patience, I think there will be solid opportunity to profit here.

Even better, the entire island is an opportunity zone— meaning you can invest in businesses or real estate in Puerto Rico and pay zero capital gains tax after 10 years.

There are a lot more details to cover about opportunity zones that I can’t get into today, but we’ve written about them before… you can check it out here.