Strangely enough, Vanuatu proves why Bitcoin can never be banned 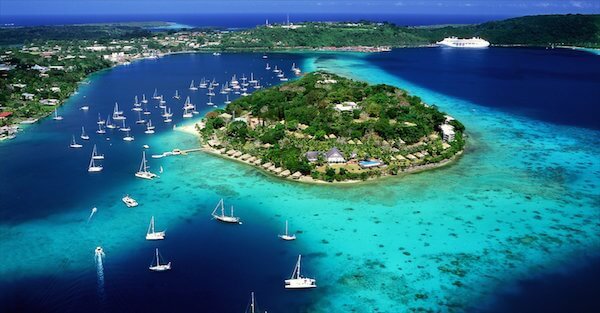 In the late 1500s, an Englishman named William Lee invented a revolutionary knitting machine that could efficiently do the work of dozens of men.

Given how important the garment industry was at the time in English, Lee’s invention was truly disruptive.

But Queen Elizabeth wasn’t so excited.

When Lee came to visit her to demonstrate the power of his new technology, the Queen grimaced, lamenting that the machine would put too many people out of work… and she refused his request for a patent.

So Lee went to France, where King Henry IV was highly supportive of the technology and issued a royal patent.

I was thinking about this story recently when I read about the government of Vanuatu announcing that they will begin accepting Bitcoin in exchange for citizenship.

If that sounds strange, let me explain–

Vanuatu is one of several nations that offers citizenship to foreigners in exchange for making an ‘investment’ in the country.

Malta. Cyprus. Saint Kitts & Nevis. Etc. These countries all offer what are known as ‘citizenship by investment’ programs.

(And dozens of countries, including the United States, offer ‘residency by investment’ programs, where foreigners receive legal residency in exchange for an investment.)

As I’ve written before, however, sometimes these programs would be more accurately described as ‘citizenship-by-donation’.

Because, in many cases, you’re not really making an investment. You’re just writing a big check to the government.

Malta’s Individual Investor Programme requires foreigners to donate 650,000 euros to the government. And that’s only one of the qualifications. In Cyprus it’s more than 2 million euros.

Vanuatu has had a number of similar programs over the years. It’s MUCH cheaper, though you’ll still end up spending north of $200,000 between the fees and investment.

Dominica’s program is probably the best value for the money, with a donation of just $100,000 (not including fees).

And Saint Kitts is offering a bit of a ‘special’ right now through March 2018, providing citizenship in exchange for a $150,000 donation to their hurricane relief fund (that’s down from the normal $250,000 investment in their Sugar Industry Diversification Fund).

Vanuatu is the first country to accept Bitcoin in exchange for citizenship… which I find pretty shrewd.

There are countless ‘Bitcoin Millionaires’ out there who bought a boatload of the cryptocurrency years ago and are now sitting on hefty gains with limited options to spend it.

So Vanuatu’s economic citizenship program will likely end up being a popular outlet for Bitcoin’s early adopters, causing a surge in applications (and much-needed revenue).

The irony is that this will put Vanuatu in the cross-hairs of illicit hackers.

It’s doubtful that tiny Vanuatu has those resources either.

Consequently, I imagine we may soon hear about the Vanuatu government’s Bitcoin wallet being hacked. The potential treasure trove is simply too big for hackers to ignore.

The good news, though, is that this will likely spur other governments to start doing the same thing (once they nail down their cryptosecurity strategies). And that’s a big deal.

Vanuatu’s decision to accept Bitcoin payments shows that there will always be competition among governments.

Some governments have already decided to impose bans of cryptocurrencies or their exchanges.

Just this morning, for example, the Russian central bank said it will block Bitcoin exchange websites.

Other governments may also move in that direction.

But there will always be other governments– often in economically underdeveloped countries– which embrace what others ban.

Online gambling is a great example. The US started banning Internet gambling websites more than 15 years ago and chased away a thriving industry.

Malta capitalized on the opportunity and developed favorable legislation to become a safe haven for online gambling companies.

Today the industry accounts for more than 10% of Malta’s economic activity. It was a big loss for the US and a huge gain for Malta.

Taxes are another great example; while some countries stupidly raise taxes and hang a “Closed for Business” sign at the border, other countries welcome business with open arms, slashing their taxes and providing generous investment incentives.

Bitcoin will be no different. Some governments will idiotically chase away the wealth, investment, and opportunity that comes from blockchain and cryptofinance.

Others will embrace it. They’ll become safe havens.

And the great thing about cryptocurrency is that it’s so easily transportable. We’re talking about something that exists online.

It’s not like some Bitcoin exchange website has to pick up and move a factory. Shifting operations from one country to another is much simpler for cryptocurrency businesses than for most traditional industries.

And as long as this type of inter-governmental competition exists between countries, as it has for centuries, they won’t be able to make a dent in the industry with their regulations.