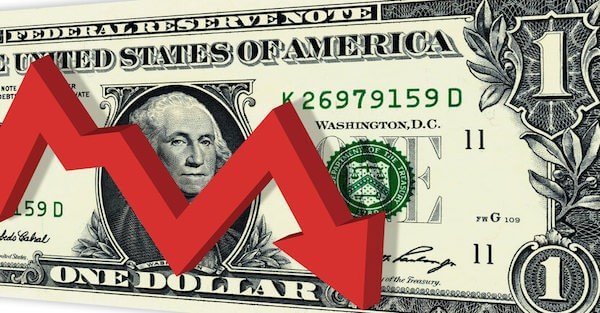 Almost exactly a year ago to the day, on January 23, 2017, I wrote to you in this column that the US dollar was overvalued against almost every currency in the world.

Specifically, I described how Donald Trump and Fed Chair Janet Yellen BOTH wanted a weaker US dollar:

Donald Trump told the Wall Street Journal last week that the US dollar is “too strong. And it’s killing us.”

On that single statement alone, the dollar index fell 1%.

Fed Chair Janet Yellen has also weighed in on the overvalued US dollar, calling it “a drag on U.S. growth”.

No one has a crystal ball, and it’s impossible to predict precisely WHEN this bubble starts to deflate.

In fact, it’s possible that the dollar becomes even stronger than it is today.

But when the two most powerful policymakers in the country both want the US dollar to get weaker, it’s pretty clear what’s going to happen.

At the time that article was published, the US Dollar Index was within 1% of its 15-year high.

That turned out to be the peak. Since then, dollar has been on a relentless and punishing slide, with the Dollar index falling nearly 13% in twelve months.

The US dollar’s overvalue had been a theme in this letter for some time; going back to at least May 2016, we had often discussed the idea of trading overvalued US dollars for undervalued assets in undervalued currencies.

As an example, I acquired a business in Australia about two years ago at a time when the Australian dollar was at a near decade low against the US dollar.

Even better, I picked up the business for an amazing deal, roughly 1x the company’s annual profit (about $1.5 million).

In an age of bubble markets where even poor-quality assets trade for 100x annual earnings on major stock exchanges, this Australian business was a real bargain… a deeply undervalued asset.

Plus, since the Aussie dollar has increased so much in value since then, I’m able to earn an additional 10% on my investment just from the exchange rate boost.

We did the same thing in Chile, acquiring and developing tens of millions of dollars’ worth of productive farmland at a time when local land prices were depressed and the Chilean peso was exceptionally weak.

Land prices are rising once again, and the peso is more than 17% stronger than its 2016 low.

I’m definitely no genius. And I’d never pretend to have a crystal ball or be able to predict the future of financial markets.

But one of the few things that we know for certain is that NOTHING goes up or down in a straight line.

There are always cycles… periods of time when particular assets do very well… and then don’t do so well.

Oil is a classic example; it reached nearly $150 per barrel back in 2008 before collapsing down to $40 during the Global Financial Crisis less than 6 months later.

Then it rose again steadily to surpass $100 per barrel by mid-2014 before sinking below $30 eighteen months later.

You get the idea. It’s just like Mr. Miyagi said about painting the fence: Up. Down. Up. Down.

Nearly everything conforms to these cycles– stocks, real estate, commodities, Bitcoin, and the US dollar itself.

And understanding this cyclical nature is an important element in avoiding big mistakes.

It’s in our nature to buy assets when their prices are rising and near the top of their up cycle.

And we tend to sell in a panic when prices are falling, i.e. near the bottom of their down cycle.

But as we’ve been discussing lately, this requires emotional detachment… and patience to wait out the cycle.

(These cycles can sometimes last for several years. So only buy what you’re comfortable holding for a LONG time.)

Obviously it’s impossible to nail the timing– no one rings a bell at the top or the bottom. And only a fool pretends to have a crystal ball.

But… even though you might not hit the exact top, it’s hardly ever a bad thing to take some money off the table to lock in some gains.

Similarly, you won’t be worse off acquiring a fantastic, undervalued asset at a cheap price, even if you don’t buy at the precise bottom.

In upcoming letters we’ll talk about the dollar’s down cycle… and what types of assets will do very well– including precious metals, commodity currencies like the Australian dollar, and other real assets.