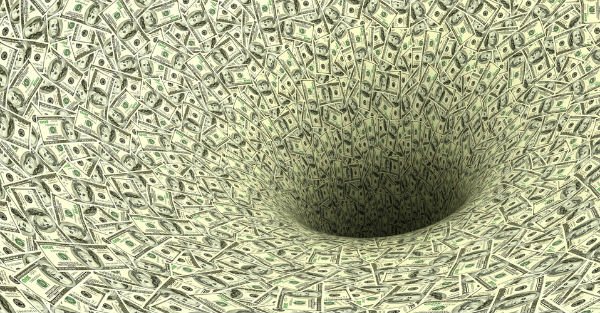 [Editor’s Note: Tim Price, London-based wealth manager and frequent contributor to Notes from the Field, is filling for Simon today.]

As a child I was fascinated by the concept of a neutron star, the tiny but immensely dense thing that’s left after a massive star explodes.

Imagine something eight times as massive as our sun packed into a sphere with a six mile radius.

Gravity compresses the surviving material so profoundly that its protons and electrons are squashed into neutrons.

Just how dense? A single teaspoon’s worth of a neutron star would weigh a billion tons.

That presupposes you could actually get close enough to extract a teaspoon’s worth. In reality, the gravitational pressure would reduce your body to a very thin smear on the surface of the star.

Very little escapes the gravitational force of a neutron star.

I never expected to encounter a neutron star but the policymakers at the US Federal Reserve have been kind enough to engineer one for us, and its gravity is so powerful it has collapsed the yields of just about every financial asset on the planet.

Investors around the world are now faced with overpriced stocks, overpriced bonds, and overpriced everything.

The Economist cites a Deutsche Bank study pointing out that for 15 countries going back as far as 1800, the average prices of stocks, bonds, and residential real estate now stand at all-time highs.

“Worse still,” writes the economist, “[Deutsche Bank] reckons the average real return from equities over the next ten years will be negative. The same is true for Treasury bonds, European corporate bonds and US residential property.”

Of course, it’s not just the US.

Like CERN– the Geneva-based European Organization for Nuclear Research that’s home to the Hadron Collider, global monetary policy has been something of an international collaboration.

The problem is that underneath the thin veneer of amity and cooperation, the currency wars are heating up.

In the mind of a central banker, it’s a zero-sum game: ‘America grows at the expense of Europe, therefore Europe must undercut America with even lower interest rates.’

They don’t seem to grasp the simple concept that competitive destructive policy is still destructive, and that it’s possible they all fail together.

In fact, they seem to be engineering that outcome.

The objective data show that stocks, bonds, and property are at all-time highs simultaneously as global economic growth is slowing.

Yet with interest rates at zero (or even negative), central banks have no ammunition remaining to fight anything.

And after the Fed blew a pivotal opportunity to begin normalizing interest rates last week, they may not have any credibility remaining either.

(After all, what message does it send to markets that your economy is too fragile to raise interest rates by even a tiny 0.25% ?)

This is what fosters incredible competition among central banks to outdo the others’ destructive interest rate policies, until each of them has produced their own neutron star of monetary policy.

And what do you get when neutron stars collide? A black hole of finance, brought to you by the very central bankers who were charged with maintaining stability.

Based on Deutsche Bank’s analysis, this may very well sum up the coming decade of investing, at least with conventional asset classes like stocks, bonds, and mutual funds.