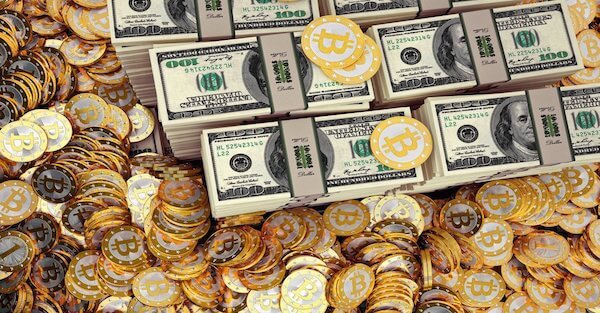 Over the weekend, the New York Times published a satirical article entitled “Everyone is Getting Hilariously Rich and You’re Not.”

That headline perfectly encapsulates the ‘Fear of Missing Out’, or FOMO, that’s so pervasive in cryptocurrency right now.

Just about everyone either knows, or has heard of someone, who’s made an absolute fortune in crypto.

And this plays perfectly to one of the darkest and most basic of human emotions: envy.

The article humorously showcases several Bitcoin (and other cryptocurrency) millionaires, poking fun at the subculture dominated by free-spending millennial 20-somethings who act as if they’re the second coming of capitalism.

A few quotes from the article will give you a sense of it:

“Sometimes I think about what would happen to the future if a bomb went off at one of our meetings. . . [That] bomb would set back civilization for years.”

“[H]is main hobbies were reading 4chan and buying vintage pornography, passions that exposed him to cryptocurrency.”

“He said his holdings are into double-digit millions but wouldn’t give specifics other than to say he’d quit his job and is starting a hedge fund.”

“They talk about buying Lamborghinis, the single acceptable way to spend money in the Ethereum cryptocurrency community.”

“The [ethereum cryptocurrency’s] founder frequently appears in fan art as Jesus with a Lamborghini.”

“And he wears a solid gold Bitcoin “B” necklace encrusted with diamonds that he had made.”

“When I meet people in the normal world now, I get bored.”

Anyhow, you get the idea.

This is a gross generalization.

But the perception is still there– it seems like everyone ELSE is spending like drunken sailors from all the money they’ve made in crypto… money that you’re NOT making.

Which brings us back to FOMO– fear of missing out. Or more importantly, what I call “Fear of Missing Out… AGAIN.”

Everybody knows that Bitcoin and Ether went to the moon. And by God they’re not going to miss out on the next one.

So perhaps the most troubling story from the article was of a 56-year old janitor who cleans the seats at the local Cinemark movie theater.

She’s now basically dumped her life’s savings into crypto, rationalizing her decision by saying “something is telling me I can trust this generation.”

Clearly that ‘something’ is her fear of missing out… again. She’s spending time with all of these people who are younger than her kids but have more money than she can dream of.

Between her envy and FOMO, she’s made a monumental financial decision driven by two extremely powerful emotions.

Even some of the wealthy crypto speculators show signs of extreme FOMO.

As a community there seems to be intense peer pressure to NOT sell… to hold one’s crypto holdings until the price reaches some mythical height.

As one young man who allegedly made hundreds of millions of dollars in crypto told the reporter, “All I know is the price of Ether is going to go up.”

Eh… according to your crystal ball?

With such prodigious gains, the rational thing to do would be to take a LOT of money off the table and lock in those profits.

But, hey… FOMO. If the price goes up 10x from here, they’ll miss out on those gains.

So, driven by some irrational belief that they can predict the future, they’re not selling.

That decision-making is as emotional as ‘something is telling me I can trust this generation.’

The lesson I want to highlight again is that emotional decisions tend to be bad decisions.

And these bad decisions often lead to painful outcomes that could have been easily avoided.

Again, I’m not suggesting to NOT buy crypto. Or to sell it.

[In full disclosure, I was a very early adopter of Bitcoin and recently sold roughly $100,000 worth primarily because I found a more productive investment for that capital in the sector. But I still own plenty of crypto and plan on holding the rest until another opportunity arises.]

The main idea is to establish and follow simple rules for yourself: don’t gamble with your savings. You worked long and hard to earn it.

Always make efforts to fully understand anything that you’re investing in… especially the risks.

Be able to make multiple arguments simultaneous, i.e. make the case FOR and AGAINST the investment. Understand both sides.

And most importantly, once you make a decision, only invest whatever amount of money you can literally afford to set on fire.