“No inflation” Friday: the dollar has lost 83.3% against… 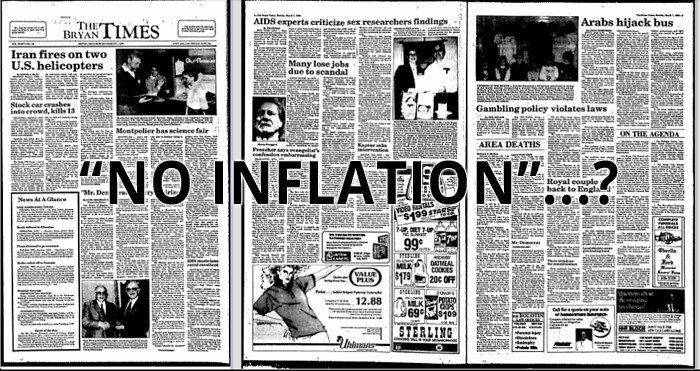 I needed a caffeine jolt late this morning after the long journey up from South America.

And while I’m generally averse to aspartame, high fructose corn syrup, and other government-sanctioned poisons, I did briefly consider a hit of Coca Cola as I walked past a vending machine on my way out of a grocery store.

Then I saw the price.

To give you some quick background, this was the same grocery store my mother used to shop at when I was a kid. And if I was really lucky, we’d stop for a can of coke on the way out– 25 cents back then.

Fast forward to today–. I’m a grown man of 35 now instead of a 9-year old kid. And while the store has changed hands a few times, there’s still vending machine near the entrance.

Same coke, same 12 ounces (though now in a plastic bottle instead of an aluminium can).

Price today? $1.50. [note, this is the vending machine price, not grocery store price.]

Put another way, $1 would have bought me 48 ounces of Coca Cola 26 years ago. Today that same dollar buys me just 8 ounces.

This means that the dollar has lost 83.3% of its value against Coca Cola over the past three decades, averaging roughly 6.6% inflation per year.

Some readers may remember the price of Coca Cola being just 5c back in the early 1950s (for a 6.5oz glass)… meaning the US dollar has lost 93.8% against Coca Cola over the past six decades.

Now, we are taught from the time we are children that ‘a little inflation is good…’

And when central bankers tell us they’re targeting an inflation rate of 2% to 3%, that certainly doesn’t seem so bad. 2% is practically just a rounding error. But bear in mind a few things–

1) An inflation rate of 2% is not price stability.

As Jim Rickards frequently points out, even with just 2% inflation, a currency loses over 75% of its value during an average lifespan. This can hardly be considered monetary stablilty.

And this practice of gradually plundering people’s purchasing power over time is incredibly deceitful.

2) Even if, they rarely meet their target.

As this case shows, 6.6% certainly ain’t 2%. The official statistics and research papers may say 2%. Reality is much different.

So as measured in Coca Cola, the average wage in the Land of the Free has declined by 11,684 ounces per week– a 63.7% decline over the last three decades.

You can make a similar calculation denominated in Snickers bars, gallons of gas, etc.

If you have a big picture, long-term view, it’s clear that standard of living is falling.

Some readers may remember decades ago– a single parent could go out and, even with a blue collar job, comfortably support a growing family.

Today, dual income households struggle to keep their heads above water. This is the long-term plunder of inflation.

And just to give you a reminder of what things used to cost, I’ve pulled a page from the March 7, 1988 edition of the Bryan Times of Bryan, OH: 26-years ago today. 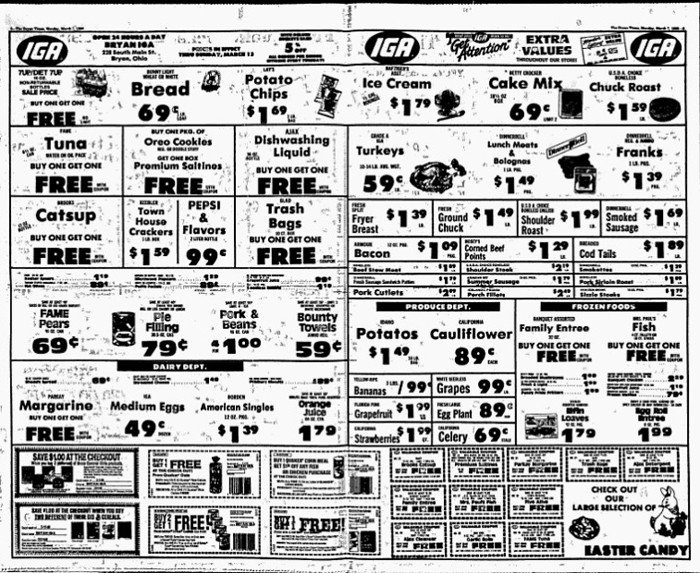 You can scroll through the paper and note the prices:

That’s the Federal Reserve for you. 100 years of monetary destruction and counting.