On the verge of a major turning point 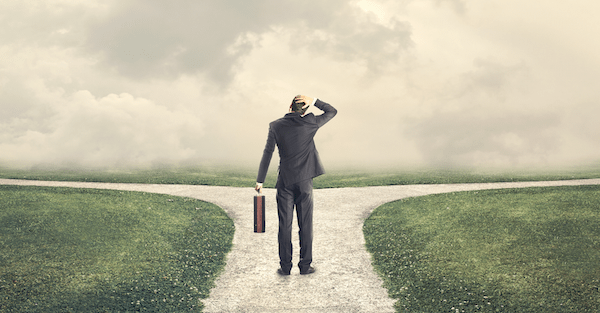 This morning I had the pleasure of being buried in a mountain of paperwork– the penalty for trying to do basically anything in the financial system these days.

It seems that everything, from sending a wire transfer to establishing a new account, comes with endless bureaucratic hoops to jump through as you’re forced to convince these people that you’re not a criminal money laundering terrorist.

In my case I was opening a new brokerage account. And as I went through the process, the questionnaire asked me about my risk tolerance.

Was I seeking low risk and low returns? Or high risk and high returns?

This is one of the oldest fallacies in investing– the idea that risk and return go hand in hand.

I remember taking a personal finance class more than 20 years ago and seeing a neat little graph in the textbook showing a straight line at a perfect 45 degree angle: the higher the risk, the higher the reward.

Sadly there was no option for “None of the above.” Because in truth I prefer strong returns with minimal risk.

And for anyone willing to put in the hard work, there are options to achieve this outcome.

We’ve been discussing this concept a lot lately because I think we’re on the verge of a major turning point.

But the Fed also signaled continued rate increases based on concerns about inflation and an overheated economy.

Two days earlier, the Department of Labor published data showing that inflation in the US reached a 6-year high.

And earlier this month the Labor Department reported the lowest unemployment rate in decades.

(The unemployment rate is a deeply flawed metric. But regardless, the central bank typically raises interest rates when it gets too low.)

This is all happening at a time when the federal government has racked up a record amount of debt that is only going higher.

The Treasury Department’s own estimates are that it will borrow trillions of dollars more over the next few years.

This is going to be incredibly difficult given that Uncle Sam’s most reliable lenders over the past decade (China, Japan, and the Federal Reserve) are no longer buying US debt.

And because there are fewer buyers for US government bonds, the interest rates on those new bonds will be higher. It’s basic supply and demand.

Bottom line, all of these trends lead to higher interest rates.

And for an economy that has been addicted to 0% interest rates for more than a decade, this will likely have serious consequences.

One obvious consequence is that higher interest rates tend to put pressure on asset prices.

Think about real estate as an example: most people borrow money to buy property.

Higher rates mean buyers can’t pay as much, so real estate prices fall across the board.

For the past several years, companies have borrowed enormous quantities of money and used a lot of it to buy back their own shares.

Stock prices surged as a result of this artificial demand.

Rising interest rates should significantly diminish these debt-fueled buybacks, meaning that one of the biggest contributing factors to rising stock prices over the past few years is going away.

So no matter whether you’re buying a house or investing your retirement savings, we’re reaching a turning point where there’s a lot of risk looming over important financial decisions.

And that takes me back to risk vs. reward.

Bottom line, you don’t have to take a lot of risk to achieve higher returns.

Here’s an easy example: right now the biggest banks in the US pay almost nothing to their depositors.

The government of the United States, on the other hand, is currently paying almost 2% on a similar product, the 28-day T-Bill.

To be clear, neither is risk-free. Not by a long shot. But I’m illustrating that the risk differential between the two options is essentially zero.

Yet the reward with T-Bills is 100x as great. So you’re taking similar risk but achieving a MUCH higher reward.

It seems obvious. But most people don’t think about this.

We’ve been trained to believe that our savings belongs in a bank, that our investment capital belongs in the stock market, and that higher returns require higher risk.

But there’s an entire universe of options that defies these conventions.

This is our Chief Investment Strategist’s primary area of expertise– he routinely finds absurdly undervalued businesses that are selling for a fraction of their liquidation value.

Think about it: if you only pay 50 cents for an asset that’s legitimately worth $1, you stand to double your money.

Yet most of the risk has already been taken off the table. So there’s not much downside remaining.

Whatever you choose to do, it’s important to start paying close attention to what’s happening.

The people who drive these policy decisions are being EXTREMELY vocal.

The Federal Reserve. The Treasury Department. They’re telling us what’s coming next. Ignore them at your own peril.