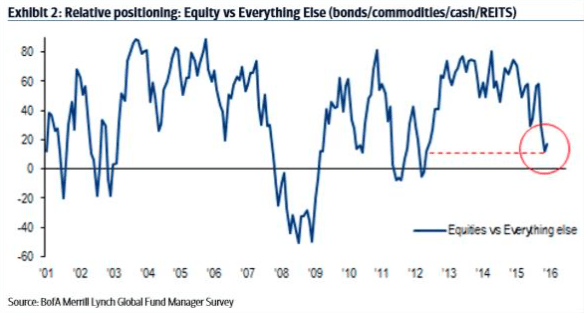 “It is because the public are a mass – inert, obtuse and passive – that they need to be shaken up from time to time so that we can tell from their bear-like grunts where they are – and also where they stand. They are pretty harmless, in spite of their numbers, because they are fighting against intelligence.”
– Alfred Jarry, ‘La Revue Blanche’, 1897.

What – if anything – can we conclude from the latest Bank of America Merrill Lynch Global Fund Manager Survey? The survey was conducted between March 4th and March 10th among 209 panellists managing an aggregate $591 billion in assets. Most types of investment life forms participated, including pension funds, insurers, hedge funds and mutual funds. (Somewhat disconcertingly, the single largest cohort of investment managers described their investment time horizon as “3 months or less”. That sounds less like disciplined fund management and more like speculative trading.)

It would be dangerous to infer too much from the survey. Do the surveyed managers represent “smart money” or merely the consensus? If the former, it might make sense to piggy-back off them. If the latter, it would make more sense to treat them as contrarian indicators and do precisely the reverse. That apparent concentration on the short term is certainly a concern.

One is partly conditioned by the cynicism that permeates the money management industry. Given that the survey is of its nature less than all-embracing in its scope, drawing conclusions from only partial evidence comes with risk. More to the point, can we trust that every surveyed manager is being honest and impartial with their responses, or is there the risk that some are being “economical with the actualité” in order to throw their competitors off the scent?

Our default position is probably to treat the results with a mild scepticism. Let’s assume the respondents are broadly representative of the asset management industry, warts and all. (They clearly can’t be unless they include the thoughts of all those R2D2s and C3POs and assorted algorithmic hot money software scampering through the stock exchange circuitry.) So we’ll treat the survey as an indicative but soft contrarian indicator.

With those caveats behind us, we note that managers’ relative positioning of equities versus other asset classes (bonds, commodities, cash and REITS) remains near multi-year lows – i.e. the equity rally may still have legs.

Within our global value fund our single biggest allocation is to Japan. So, once again mindful of the caveats, we’re heartened to see that surveyed managers have reduced their weightings to that market – per the chart below. (Which clearly leaves the potential for more capital to enter it over time.) 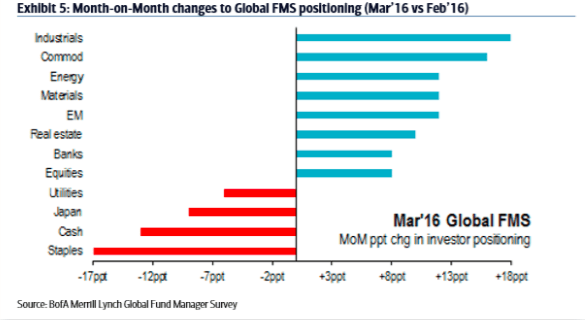 We were particularly struck by managers’ attitudes to “financial engineering” – a net 16% of investors considered (US) corporate payout ratios – dividends and buybacks – too high. The current reading for this view is at its highest since March 2009.

Whereas corporate payout ratios are at roughly 60% in the UK and closer to 80% in the US (many US companies are borrowing money in order to pay dividends or to buy back stock, which is ultimately unsustainable) the corporate payout ratio in Japan is at roughly 30%. That figure is almost certainly going to rise, at least in part courtesy of Abenomics’ third arrow, namely structural reform, and a renewed focus on corporate governance and shareholder returns. Japanese companies now have the strongest balance sheets in the world, and corporate Japan is sitting on nearly $2 trillion of undeployed cash. In fact, with Japanese interest rates now negative, we can confidently expect the corporate payout ratio there to rise. The opposite trend may be more likely in the Anglo-Saxon equity markets – especially if a US recession happens to be en route.

Surveyed managers are now a net 13% overweight equities versus a net 5% overweight last month. This is less obviously bullish – but of course it depends what equities we’re talking about. Institutional investors in the survey are probably reflecting the composition of major benchmarks like the MSCI Global Equity Index. We don’t have that self-imposed constraint, so we can go exclusively to where we see only the most compelling value (hint: not in the US). 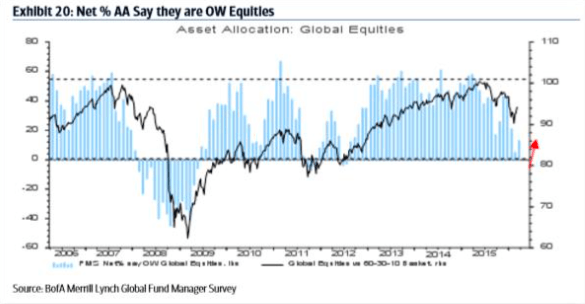 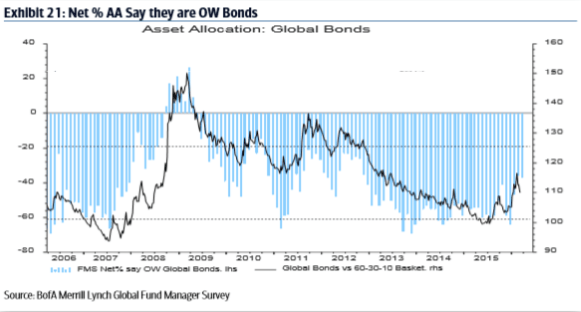 A net 37% of respondents are underweight bonds. For all the laughable value on offer in the bond market, this may argue for the extension of the bond market rally. 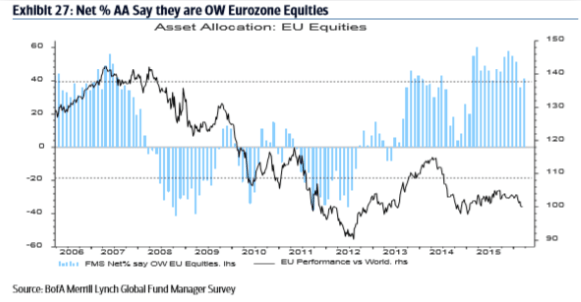 And a net 41% of respondents are overweight euro zone equities. They may be seeing hidden value that we’ve yet to uncover. More likely, they are simply seeing things.

But as we’ve already alluded, not every fund manager is playing the same game by the same rules. Benchmarking, and a slavish attendance to the tyranny of indices, are one thing, and investing without any constraints other than a commitment to compelling and defensive bottom-up value quite another.