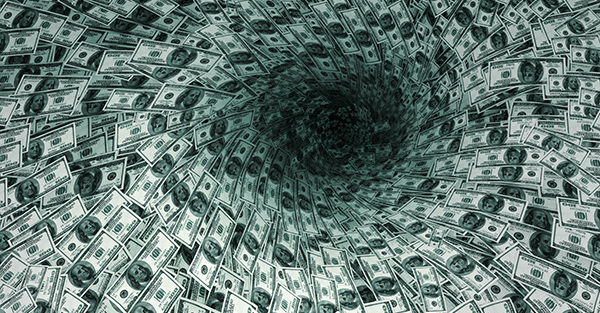 Shortly before leaving the Fed this year, Ben Bernanke rather pompously declared that Quantitative Easing “works in practice, but it doesn’t work in theory.”

There is, of course, no counter-factual.

We’ll never know what might have happened if the world’s central banks had not thrown trillions of dollars at the banking system, and instead let the free market work its magic on an overleveraged financial system.

But to suggest credibly that QE has worked, we first have to agree on a definition of what “work” means, and on what problem QE was meant to solve.

If the objective of QE was to drive down longer term interest rates, given that short term rates were already at zero, then we would have to concede that in this somewhat narrow context, QE has “worked”.

But we doubt whether that objective was front and centre for those people – we could variously call them “savers”, “investors”, or “honest workers”.

As James Grant recently observed, it’s quite remarkable how, thus far, savers in particular have largely suffered in silence.

Quite the reverse: interest rates are clearly too low – at least for savers.

All the way out to 3-year maturities, investors in German government bonds, for example, are now faced with negative interest rates. And still they’re buying.

We think the QE debate should be reframed: has QE done anything to reform an economic and monetary system urgently in need of restructuring?

We think the answer, self-evidently, is “No”.

The answer is also “No” to the question: “Can you solve a crisis of too much indebtedness by increasing debt and suppressing interest rates?”

The toxic combination of more credit creation and global financial repression will merely make the ultimate endgame that much more spectacular.

To Jim Rickards, simply printing money and gifting it to the banks through the somewhat magical money creation process of QE is like treating cancer with aspirin: the supposed “solution” does nothing to address the root cause of the problem.

The West is trapped in a secular depression, and “normal” cyclical solutions such as monetary policy measures, are not just inappropriate, but damnably expensive for the rest of us.

Only widespread economic restructuring will do. And that involves hard decisions on the part of politicians.

Thus far, politicians have shown themselves predictably not up to the task. Or in the words of Jean-Claude Juncker, “We all know what to do; we just don’t know how to get re-elected after we’ve done it.”

And let’s not forget that other notable Junckerism, “When it becomes serious, you have to lie.”

So, back to the debate:

2. But the problem wasn’t the cost of capital. The problem was, and remains, an oversupply of debt, and the risk, now fast becoming realized, of widespread debt deflation.

To put it another way, the world appears to be turning Japanese after all, despite the best efforts of central bankers and despite the non-efforts of politicians.

3. The solution is fundamental economic restructuring. Government spending cuts will not be optional, although tax cuts might be. The expansion of credit must end – or it will end in an entirely involuntary market-driven process that will be extraordinarily messy.

This is where we start to view the world, once again, through the prism of investments – not least since we’re not policy makers.

Markets have become that much more volatile recently (and not just stocks – see the recent wild trading in the US 10 year government bond).

Moreover, inflation (other than in financial asset prices) seems weirdly dormant in certain parts of the world.

Understanding these phenomenon is best explained by both Jim Rickards and by the good folks at Incrementum through the pertinent metaphor of tug of war. 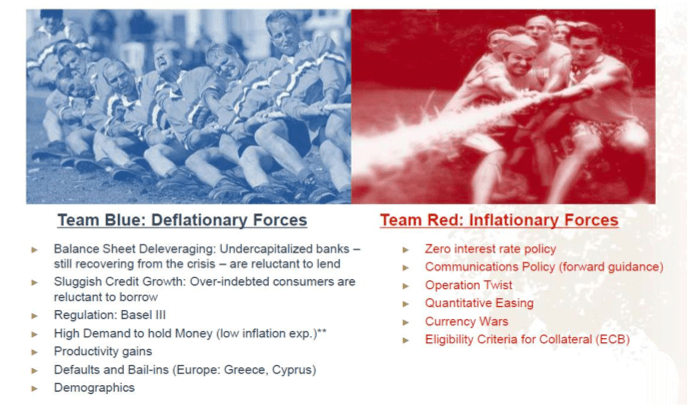 The blue team represents the markets. The markets want deflation, and they want the world’s unsustainable debt pile to be reduced.

There are three ways to reduce the debt pile. One is to engineer sufficient economic growth (no longer feasible, in our view) to service the debt.

The second is to default (which, in a debt-based monetary system, amounts to Armageddon).

The third brings us over to the red team: explicit, state-sanctioned inflationism, and financial repression.

The reason why markets have become so volatile is that from day to day, the blue and red teams of deflationary and inflationary forces duke it out, and neither side has yet been convincingly victorious.

Who ultimately wins? We think we know the answer, but the outcome will likely be a function of politics as much as markets.

While we wait for the outcome, we believe the most prudent and pragmatic course of action is to seek shelter in the least overpriced corners of the market.

For us, that means explicit, compelling value and deep value equity.

Nothing else, and certainly nothing by way of traditional government or corporate debt investments, makes any sense at all.