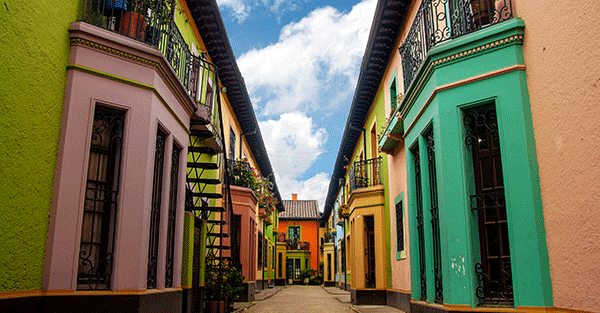 Growing up in the US I heard the same stories as everyone else about Colombia.

From the ivory towers in our suburban enclave, it seemed ludicrous why any sane individual would risk life and limb to visit such a dangerous place.

Hollywood drove the point home every chance they had.

When Harrison Ford’s character from the 1994 film Clear and Present Danger went to Colombia, for example, it was a nonstop onslaught of death and destruction.

And maybe that really was the way things were 25+ years ago. But the Colombia of today is totally different.

I don’t want to sell you a line of bull and pretend that Colombia is devoid of challenges.

A tourist was killed recently as well… though this strikes me as a hollow criticism given that hardly a month goes by anymore in the US without a mass shooting.

The country risk in Colombia is clearly not zero. But the risk is nowhere near what it used to be… or what people still believe it to be.

Yet even though things are so much better now, the Hollywood reputation from a quarter of a century ago still lingers, which means that the perceived risk is very high.

The actual risk, on the other hand, is dramatically lower. Colombia is incredible, far better than most folks could possibly believe without seeing it for themselves.

That’s one of the reasons I travel so much– I put boots on the ground and see firsthand what’s really happening… and determine for myself what the REAL risks and opportunities are.

And real opportunities do exist anytime there is a major difference between perceived risk and actual risk.

Look at the US banking system, for example.

The perceived risk is very low. Few people ever question the sanctity of hallowed financial institutions in the Land of the Free.

But the actual risk is much higher.

US banks’ own financial statements are a testament to their dangerously low levels of liquidity, and the pitifully disingenuous accounting tricks they use to hide losses.

When the actual risk is much higher than the perceived risk, it’s time to get out.

In Colombia’s case, it’s the opposite. The actual risk is much LOWER than the perceived risk.

Colombia is ‘priced’ like it’s still that same ultra-dangerous country it was back in the 1980s, suggesting the high-risk perception persists.

Its reputation… the Colombia stigma… has been a major drag on asset prices for years. Which means that for anyone who understands what’s really happening in this country, high quality assets are available at a major discount.

Because on top of the Colombia stigma, the emerging global recession has caused a decline in asset prices, including stocks, real estate, and the currency.

In US dollar terms, the Colombian peso has passed 3,000 per dollar, more than 30% weaker than its average over the last 10+ years.

I’ve been writing extensively about how overvalued the US dollar is.

Colombian assets, on the other hand, are dramatically undervalued.

Herein lies is the opportunity: trading an overvalued paper currency with pitiful fundamentals for undervalued, high quality assets in a country with a bright future.

If you’re adventurous, get on a plane. You won’t be disappointed.

Colombia is fantastic, and you’ll be pleasantly surprised, not only at what you find, but at the high quality private businesses and properties that are available for an unbelievable bargain.

(More on this next week).

If your schedule’s too tight to make a trip down, consider taking a bit of Colombia exposure in your investment portfolio.

There are a number of Colombia ETFs available to buy without leaving your living room that offer ownership in Colombia’s largest and most successful businesses.

Many of these companies are trading at multi-year lows, selling at a discount to their net asset values, and pay strong dividends upwards of 5%.

No one has a crystal ball, and it’s possible that Colombia might become even cheaper. Or stay cheap for years.

But at these levels today, the country is already an incredible bargain.

Either way, it should be on your radar.

Colombia is starting to get more attention, and that’s only going to continue. Soon, I expect this place will become the next great tourism, lifestyle, and investment hotspot.

As long as the Colombia stigma persists, it’s one of the best-kept secrets in the world.

But it won’t remain that way for long.