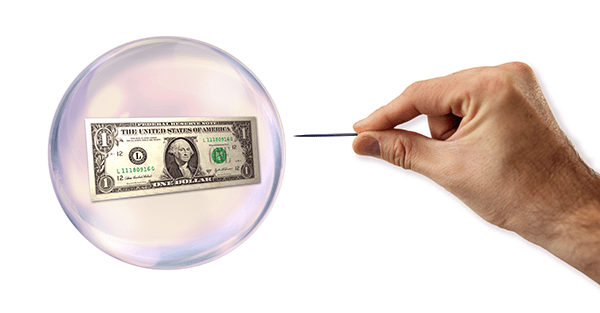 It was a light-hearted way for the paper to gauge whether foreign currencies are over- or under-valued by comparing the prices of Big Macs around the world.

After all, no matter where in the world you buy one, a Big Mac generally consists of the same ingredients– two all beef patties, special sauce, etc.

A Big Mac currently sells for 49 pesos in Mexico, for example; at the current exchange rate, that’s about $2.23 US dollars.

This means that a Big Mac in Switzerland costs 2.8x as much as the exact same burger in Mexico.

Obviously there are a LOT of differences between Switzerland and Mexico that would ordinarily lead to some difference in price.

But 2.8x is clearly excessive, suggesting that the Mexican peso is undervalued relative to the Swiss franc.

It shows that the US dollar is currently OVERVALUED against almost every currency in the world.

The average price of a Big Mac in each of these countries is dramatically cheaper than in the United States.

The Economist’s data show, for example, that the average Big Mac price in the US is $5.06.

(By the way, that’s 17% higher than the average US price of $4.37 that the newspaper reported in January 2013… not that there’s been any inflation.)

In Canada, however, the paper reports an average price of $6 Canadian dollars, or USD $4.51 at current exchange rates.

This suggests that the Canadian dollar is about 11% undervalued relative to the US dollar.

In the Euro area, the average price of a Big Mac is 3.88 euros, about $4.06 based on current exchange rates.

That implies the euro is 20% undervalued against the US dollar.

In places like Malaysia, South Africa, and Russia, it’s even more extreme, with local currencies 60%+ undervalued against the US dollar.

It’s important to understand what this means.

The fact that the dollar is overvalued isn’t some big prize. It’s not an indication that America is #1, the dollar is King, or that the US economy is strong.

This is a bubble.

Currencies, just like stocks and bonds, are assets traded in global financial markets.

And just like stocks and bonds, currencies can be in a bubble.

You may remember the dot-com bubble of the 1990s, when the stock prices of laughable websites (like Pets.com) soared to unimaginable heights.

As with all bubbles, that one eventually burst, and stock prices crashed.

The US dollar has been in a bubble for more than two years.

Yes, there are clearly a number of fundamental differences between the United States and other countries that would lead to natural exchange rate imbalances.

But again, we’re not talking about the US dollar being overvalued by 5% or 10%. We’re talking about EXTREME differences that are completely irrational.

And it’s not just Big Macs either.

Nearly every shred of objective data suggests that the US dollar is overvalued.

The “US Dollar Index,” for example, which measures the US dollar’s value against an entire group of currencies like the euro, Japanese yen Canadian dollar, etc., is currently at its highest level in 14 years.

Politicians and policymakers hate this.

They ignore all the benefits of a strong currency, and instead claim that a strong dollar makes US goods and services too expensive for foreigners to buy, which hurts exports.

Donald Trump told the Wall Street Journal last week that the US dollar is “too strong. And it’s killing us.”

On that single statement alone, the dollar index fell 1%.

Fed Chair Janet Yellen has also weighed in on the overvalued US dollar, calling it “a drag on U.S. growth”.

No one has a crystal ball, and it’s impossible to predict precisely WHEN this bubble starts to deflate.

In fact, it’s possible that the dollar becomes even stronger than it is today.

But when the two most powerful policymakers in the country both want the US dollar to get weaker, it’s pretty clear what’s going to happen.

This means that, right now, if you’re holding US dollars, you have an opportunity.

The evidence shows that the dollar is irrationally overvalued, and both the Federal Reserve and the US government want it to be weaker.

The evidence also shows that there are plenty of foreign currencies which are heavily UNDER-valued against the US dollar.

The old saying in investing is “Buy Low, Sell High.”

It also works the other way: “Sell High, Buy Low.”

And that is precisely the opportunity right now: to SELL overvalued US dollars at their 14-year high, and BUY top quality, undervalued foreign assets at their record lows.