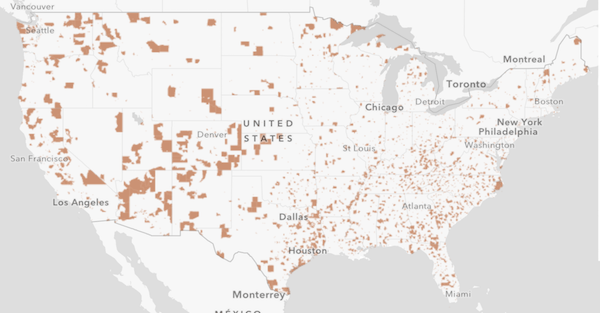 I’m not used to seeing the government offer taxpayers a win-win.

But a little known provision snuck into Trump’s 2017 tax reform law is possibly the best tax-advantaged investment strategy offered in decades. And it will help some of the poorest areas of the US too.

It’s the brainchild of Sean Parker, the founder of Napster and the first major investor in Facebook.

Traveling in Tanzania, he realized none of the $2 billion worth of aid flowing into the country each year reached certain poor areas.

And he noticed something similar about the US, in the poor neighborhoods of San Francisco.

Here all his Silicon Valley buddies were sitting on record high gains in almost every asset class after a decade bull run. But they had no incentive to collect their gains, and invest them in the areas that needed it most.

The solution was Opportunity Zones.

It’s a win-win scenario. You get an amazing tax deal, while helping to solve the income disparity in the US.

The legislation allowed states to designate “Opportunity Zones” in almost 9,000 distressed communities across the USA. These are areas with high poverty and unemployment.

Here’s how this opportunity works…

1. You sell your asset, and realize an initial capital gain (from stocks, bonds, crypto, real estate, gold, art or most anything else).

2. Within 180 days, you invest some or all of your gains into an Opportunity Zone Fund.

(Tax deferral allows you to delay paying taxes so your money can compound at a substantially higher rate.)

5. If you hold that investment for 10 years, any capital gains you earn from the Opportunity Zone Fund are TAX FREE.

The rules are simple, and the funds are flexible.

But there will never be a better time than now to take advantage of Opportunity Zones.

The first reason is the simple math. You can only defer the capital gains tax until December 31, 2026.

That’s just seven years away, and you need to hold the Opportunity Zone investment for seven years to get the full 15% discount on your original capital gains tax. That means you need to realize and re-invest your gains by the end of 2019.

You’ll still get a 10% discount on your original capital gains tax if you hold the new investment for five years. So, in theory, you could take advantage of that up until the end of 2021…

That’s because the Bolsheviks are coming. And they hate this.

A few months ago, Amazon backed out of a plan to locate its second headquarters in New York City. The spot they picked to build HQ2, inject billions of dollars, and provide thousands of jobs, was inside an Opportunity Zone.

But all the benefits to NYC wasn’t enough for the Bolsheviks led by Alexandra Ocasio-Cortez. Amazon was still going to get some benefit from the deal.

It was a win-win, and the Bolsheviks are only interested in winning when the other guy loses. So they contented themselves with a lose-lose deal. And that’s what they have in store for all of America if they rise to power.

All the major 2020 Presidential candidates are clamoring to promise the highest taxes, the biggest wealth redistribution, the most assets confiscated.

People that chase away investments, demonize wealth, and raise taxes do not inspire confidence in the markets.

More likely they’ll crash the market, as everyone tries to sell before the tax rates are jacked up.

But even if the Bolsheviks don’t take power, market cycles only last for so long. Right now, we’re in an everything bubble, the longest bull market in history, with stock prices just about at all time highs.

No one has a crystal ball, but it can’t last forever.

Why not lock in these gains while asset prices are at all time highs?

It’s hard to imagine you’ll be worse off parking those gains in this extraordinary tax-advantaged vehicle. Gains that you can continue to invest tax-free.

But if you fast forward two years from now, you might be kicking yourself if the Bolsheviks come to power, collapse the market, and eliminate this tax opportunity.

There’s not really much downside here. It is definitely worth talking to your tax advisor or financial manager about.

But because this is such an incredible opportunity, we’re releasing a redacted preview to all of our readers.