This stock returned 5,900% during the last oil boom… and we’re buying it again today 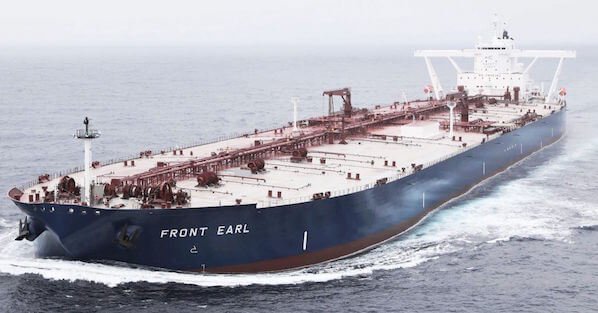 Deeply cyclical industries such as shipping, oil & gas, mining, and the service industries that supply them are one of the few areas of the market where you can actually make 5 to 10 times your money… and you can make those kinds of returns on large, well-known companies.

Anyone who tells you those types of gains are only achievable by taking wild speculations (bitcoin comes to mind today) is wrong.

Cyclical stocks can fall 80 or 90% during a downturn. But when the market turns, these beaten-down stocks are coiled springs.

And here’s the best part…

Because you’re buying solid companies at rock-bottom prices, you’re able to achieve these enormous returns without huge amounts of risk.

Take shipping company Frontline (FRO) for example. It’s the largest oil tanker company in the world. Frontline owns a fleet of 59 tankers that it uses to move oil and oil products from where they are produced around the world to where they are consumed.

It’s a simple business. But it’s one of the most cyclical in existence.

When oil prices soar, demand for tankers is extremely high and shipping companies such as Frontline charge very high “day rates” to rent their vessels.

As day rates increase, companies redeploy any idle ships to capture those profits. And they order new ships (which can cost around $100 million and take years to build).

At the same time, the underlying oil market is seeing similar activity…

Day rates for shipping plummet. And highly indebted shipping companies struggle to even service their debt (and hold on to their ships).

Lots of shipping companies go out of business in the downturn, which reduces the tanker supply.  The companies that survive are forced to idle their excess ships.

Soon after, there’s a shortage of tanker capacity. And day rates start creeping back up.

The companies that survived the cyclical downturn are in prime position to make windfall profits as the next bull market gets under way.

You get the idea. Cyclical companies like Frontline are volatile.

And shares of Frontline have fallen 98% to just over $6 a share.

But Frontline is still one of the largest tanker companies in the world with a $1 billion market cap. It’s survived previous downturns. And I’d bet it will survive this one, too.

So anyone buying shares of Frontline today could potentially make hundreds, even thousands of percent profits.

Wait for cyclical stocks to fall 90%, buy at the depths of the market, then wait for the cycle to turn around.

Here’s a 70-year chart of crude oil prices that shows you just how big the swings can be. Be honest with yourself… Could you withstand these wild price swings? 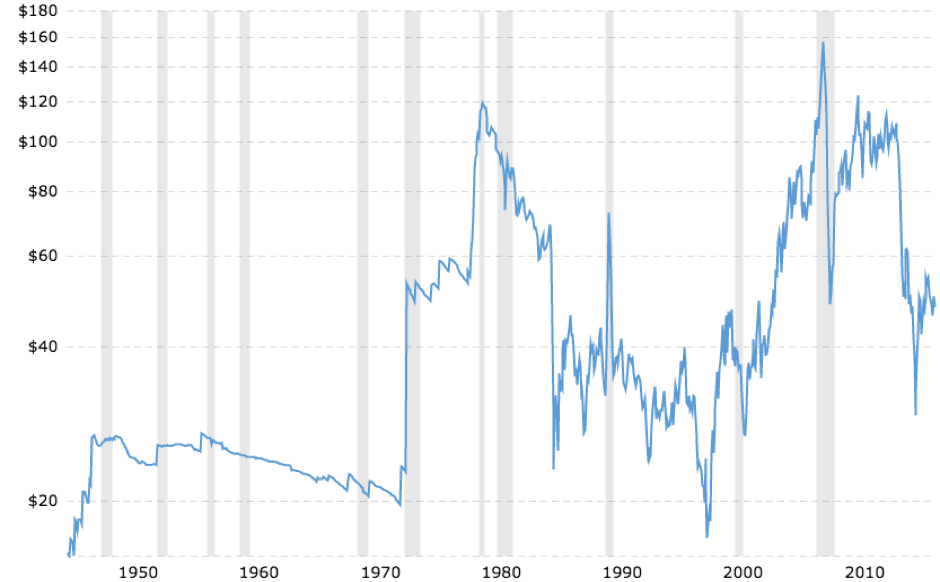 I’m currently recommending a cyclical oil exploration company in The 4th Pillar… And it fits perfectly into my strategy of buying high-quality companies at less than their net cash.

Right now the company has a market value of under A$300 million. But it’s got around A$400 million in cash and no debt.

Plus, the company owns 100% of an oilfield I think can throw of US$409 million a year in revenue (remember, the entire company is under A$300 million today) … And oil majors Chevron and Statoil are exploring near its other major asset. If either of these companies has success, this small company will soar in value.

4th Pillar subscribers can access this recommendation in my September issue.