What’s Next for Gold and Silver? 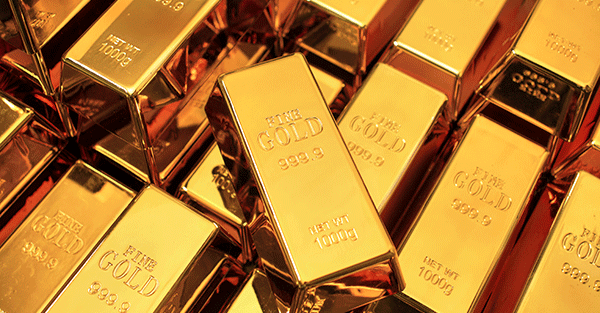 It’s a simple premise… and I think it’s high time that the former applies to precious metals. Simply put, after 10+ years of gains and 15% (gold) / 25% (silver) year-to-date gains, it’s time for a bit of a breather. There are a few key reasons why:

1) Gold jewelry demand is down across the globe, from China to India to Europe to North America. Year over year, demand fell 15% last quarter from the previous year according to the World Gold Council… and jewelry comprises 42% of all gold demand.

2) The latest bout of money printing from the Fed, BoJ, and ECB is likely baked into the prices already. Mr. Bernanke, for example, was quite clear about maintaining zero interest rates and printing money to infinity and beyond… As such, there’s very little surprise remaining in the short run.

Further, bear in mind that Mitt Romney has stated numerous times that he would replace Ben Bernanke. Consequently, should Mr. Romney win the US election next month, this may reflect negatively on the gold price.

3) Sustained high prices are bringing out a lot of scrap supply from the public. The ‘cash for gold’ phenomenon is worldwide. Simon has reported on this numerous times from all over the world. In fact, when I was in Manila last week, for example, there were similar promotions in all the major national newspapers. 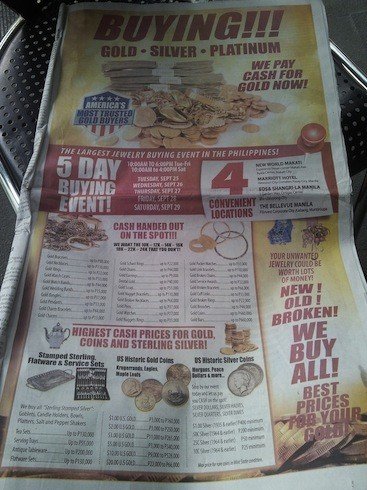 The consequent scrap supply being re-introduced to the marketplace could put downward pressure on prices. In fact, I saw similar indications before calling the temporary top in the silver market in early 2011 at $50 an ounce. If you followed that advice, you would have made out handsomely.

To be clear, I’m not suggesting a collapse in metals prices… merely a pause to consolidate gains and the possibility of a correction over the next several months.

In the long-term, trading out worthless government paper for physical assets is a fantastic move. Simon has the farm in Chile.  I have a collection of investment-grade fine wine. We both own precious metals. And several years from now, we’ll look back on today’s gold price as cheap.

This makes any potential short-term correction an excellent entry point for purchasing gold and silver.

Some people around the world understand this concept.

While in Singapore’s “Little India” district recently, I saw many jewelers offering gold savings plans for migrant workers. Their sensible pitch– take the part of your salary that you save each month and buy physical gold with it. 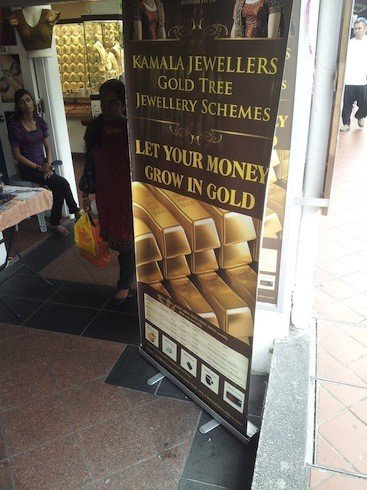 When you think about it, it makes a lot of sense. Bank accounts offer zero interest rates. Besides, gold tends to stick to your hands better than cash in a bank account.  So, you won’t be tempted to liquidate and spend it.  For a long-term savings vehicle, that’s precisely what you want.

(If you have kids, it may be a good idea to get them started saving in this way… it’s a much better habit to cultivate than sticking government paper and coins into a piggy bank earning 0%, just like a real bank.)