Why portfolio theory is wrong 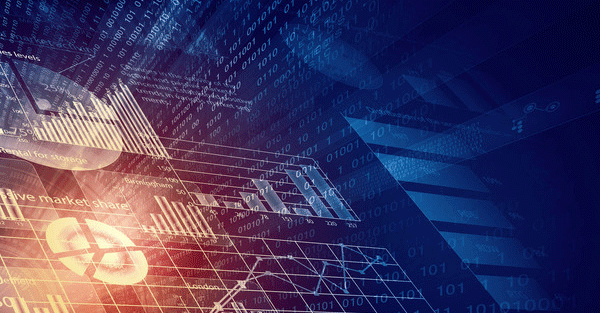 “Suffice it to say that volatility and risk are not the same thing, but that for reasons which remain obscure most of the investment world chooses to treat them as if they are. The only one that makes any sense at all is that the mathematicians who came to dominate the financial world from the 1950s onwards were desperate for something they could calculate, and the variance of past periodic returns seemed like the best candidate.”
– Guy Fraser-Sampson, ‘Intelligent Investing’

Some people in finance have a sniffy attitude towards academics, writes Buttonwood in the latest Economist magazine. For good reasons, we might add. (Why are academics so bitchy? Because the stakes are so low. And as Jerry Pournelle observed, you won’t learn much about capitalism at university, and you shouldn’t expect to. Capitalism is a matter of risks and rewards, and a tenured professor doesn’t have much to do with either.) So far, academia’s biggest contributions to finance have been Modern Portfolio Theory, the Capital Asset Pricing Model (CAPM) and the Efficient Market Hypothesis. With contributions like that, who needs asinine overly simplified wrong models?

From the get-go, Buttonwood’s piece (‘Risk and the stock market’) launches from a dubious platform:

“Risk is linked to reward; it is virtually the first lesson one learns about finance. Safe assets pay low returns; if you want higher returns, you have to risk your capital.”

But QE has subverted the relationships between supposed safety, returns and risks. As Jeremy Siegel points out,

“You have never lost money in stocks over any 20-year period, but you have wiped out half your portfolio in bonds [after inflation]. So which is the riskier asset?”

Today, for example, all German government bonds out as far as 9 years to maturity carry a negative yield. Anybody buying them and holding them until redemption is guaranteed to lose money, even before inflation. Safe? Or extremely hazardous?

And as Berkshire Hathaway’s Charlie Munger points out, using volatility as a measure of risk is madness. Risk, for Berkshire and for ourselves, is either the risk of permanent loss of capital or the risk of inadequate return.

So it is hardly surprising that two papers in the Journal of Portfolio Management find fault with financial theory. The first, ‘Risk Neglect in Equity Markets’, by Malcolm Baker of the Harvard Business School, found that – as conventionally defined – more risk led to lower returns, not higher ones. Baker took two portfolios from 1967. One consisted of the 30% of US stocks with the lowest beta (volatility relative to the market as a whole), the other of the 30% of US stocks with the highest beta.

Baker’s study is not alone. In ‘What Works on Wall Street’, James O’Shaughnessy selected the 50 most expensive stocks in the US stock market on the basis of a variety of metrics (price / sales; price / cashflow; price / book, and price / earnings), together with the 50 cheapest stocks using the same metrics. Each portfolio of 50 stocks was rebalanced annually to ensure that the focus on outright expensiveness and cheapness remained consistent over time. The results are shown below.

Value of $10,000 invested in various value strategies, over 52 years 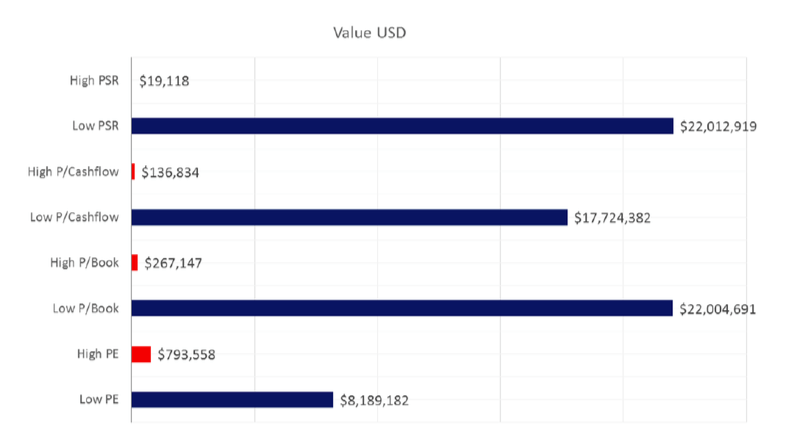 Source: ‘What Works on Wall Street’ by James P. O’Shaughnessy

Financial theory would have suggested that the ‘expensive’ portfolio enjoyed higher returns. O’Shaughnessy’s study, like Baker’s, showed exactly the opposite.

Perhaps value trumps growth. (We clearly believe so, which is why we established a global fund of unconstrained value managers.) Perhaps financial theory is wrong.

The second paper cited by Buttonwood examined the role of tracker funds – cheap, passive market-tracking vehicles. The index-tracker owes its existence to the validity of the Efficient Market Hypothesis – the theory that active managers cannot beat the market over time. One problem with trackers is that they are dumb. They “dilute the purpose of the stock market, which is to allocate capital to the most attractive companies”. Another problem with trackers is that they are dangerous. Firstly, they cause herding, as trackers collectively buy or sell the market’s respective winners and losers. Secondly, they offer no escape route for the investor in the event of a market sell-off. The market-tracking investor is destined to go down exactly in line with the market. This is a particular problem if stock markets are currently priced above their fair value, which certainly appears to be the case for the S&P 500, which stands roughly 60% above its long term fair value, according to Robert Shiller’s cylically adjusted p/e ratio, or CAPE.

The third problem with trackers is that the Efficient Market Hypothesis is wrong. Warren Buffett made the same observation when he wrote about the Superinvestors of Graham and Doddsville in his appendix to Ben Graham’s reissued ‘The Intelligent Investor’ in 1984. There is a class of managers that has meaningfully outperformed the market over many years, whilst simultaneously taking on less risk, because everything they buy offers a ‘margin of safety’ by comparison to more expensive (and therefore riskier) stocks. They are called value investors and we are extremely happy to be invested right alongside them.