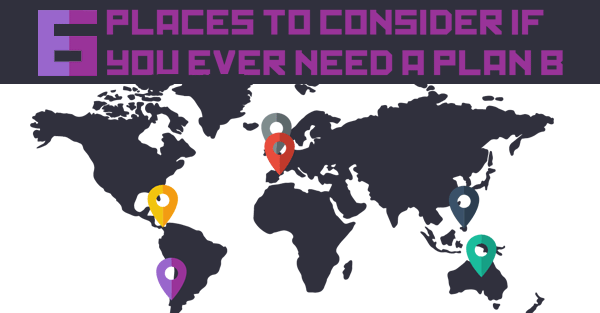 Looking for the best second residency countries for retirement or as a Plan B destination? Below we cover six of the best places to retire or move to in 2021.

In the aftermath of the recent wave of terror attacks in France a number of voices have commented on the unstable political and cultural climate in France.

Among them is Israeli Prime Minister Benjamin Netanyahu, who has called on French Jews to “come home to Israel” where they will be safer.

He even urged Israeli lawmakers to enact new legislation to make it easier for French Jews to immigrate to Israel.

There’s of course a lot of sensationalist talk going on right now.

However, rational people do have a plan B. You might never need to use it, but if you do, you’ll be acting from a position of strength and confidence, instead of fear and insecurity.

Last week we talked about the richest man in Asia, Li Ka-shing, and how he’s diversifying abroad to protect his assets, business, and family.

This is what rational people do—they seek out prudent solutions and alternatives so that all their eggs are not in any one country’s basket.

Underneath the surface there’s a lot of strife and potential for cultural, economic, social, and military conflict in the world right nreow.

Governments are broke and becoming more and more desperate.

As things deteriorate further and anger towards the system rises, we can expect more rioting, more violence, more revolutions, and even outright war.

In spite of everything, there are pockets of the world where you can find good news, safety, and opportunity.

It just makes sense for people to seek out alternatives in today’s climate. You want to have a safe haven where you can go just in case. Having options will help you and your family sleep better at night.

Where would you go if things went really difficult and you needed to skip town, whether for a short or long term?

You don’t want to have this discussion while you’re packing your bags. You would do well to think about it while you still have time to prepare.

Where are the places that you’d want to go?

Aim for safe, stable countries with growing economies where you can obtain residency fairly easily.

You might consider investigating some of these places as potential safe havens for foreign residency:

Nestled high in the Pyrenees mountains between Spain and France, this tiny principality is an often overlooked European gem. It’s peaceful, safe, and gorgeous—and a short trip from Barcelona.

You can get residency there by forming a company, enjoying some of the lowest taxes in the world.

Although a relatively difficult (i.e. expensive) place to obtain residency, there is a back door.

Norfolk Island is halfway between Australia and New Zealand, has great weather and outdoor lifestyle, and is not on anybody’s radar.

As long as you can demonstrate that you can financially support yourself, you can obtain residency in this Australian island territory.

One that I’m keen on, of course, and where I’m spending a lot of my time. It’s safe, peaceful, civilized, and incredibly diverse.

North Americans would find it familiar in many ways, plus there are many business and investment opportunities down here.

Right now, getting residency is still very straightforward, practically for everyone. Don’t expect this to last, however, as Chile is becoming a popular option for a lot of people.

If Andorra is not for you, but you’re still considering Europe, Netherlands is a potential alternative. Especially for US citizens who can form a company and obtain residency in the country (and gain access to Europe’s borderless Schengen Area) easily on the basis of the Dutch-US treaty.

Still one of the easiest places in the world to obtain residency for a long list of citizens from countries that have “friendly relations” with Panama. And you don’t even have to spend any time there to maintain it.

This was a temporary presidential measure a few years back, however, so don’t expect this option to last forever.

They officially call it a ‘retirement visa’, but if you’re over 35, you can easily become a resident of this beautiful tropical country with a simple refundable bank deposit.

Or if you’re over 50 and are receiving some sort of pension income of at least $800 per month, it’s even easier.

English is widely spoken and you’ll find a lot of the creature comforts from home, owing to the long US influence in the country.

These are a few options from all over the world that should suit just about anyone to establish an alternative residency overseas.

Having foreign residency means you can legally stay and work there for as long as you want without having to worry about being kicked out.

It’s a plan B that you wish you might never need—but you’ll sleep much more soundly at night knowing you have alternative options if you do.