A boots on the ground perspective on the Chile riots

This is true everywhere in the world. Even in capitalist bastions like Hong Kong, there is a misguided minority that believes they should prosper from others’ labor.

Usually this attitude fades with age and career progression, right around the time someone strokes his/her first check to the local tax authority. After all, it’s much easier to be a socialist when you’re on the receiving end of benefits, not the one footing the bill.

Here in Chile, my adopted home for many years, it’s no different. A market-oriented society with a thriving economy, Chile has had remarkable growth over the last 20-years. Its economic expansion has been no doubt due to this market-based model, as well as surging demand for copper, Chile’s prime export.

People in Chile recognize that their standard of living is much higher than it has ever been, especially compared to their neighbors who still dabble in socialism.

Just over the mountains, for example, Argentina is a hopeless basket case whose government makes a sport of fleecing its people and maintaining the elitist mafia-like plutocracy.

Now– the last few weeks in Chile have showcased student protests over the cost of their university education; they demanded that the government provide free tuition to all students, and they weren’t going to take NO for an answer.

At first, most of the country supported them. Local polls showed that Chileans were proud of their kids standing up to the government and letting their voices be heard… even if they didn’t agree with the politics.

You see, Chile is a pretty conservative place. There are definitely pockets of socialism throughout the country, as there are just about everywhere, but if Ron Paul were running for President here, he would do quite well… and certainly get all the media coverage he could handle.

For the most part, Chileans were just happy to see their kids get off Facebook for a few days and stand up for an issue that was important for them. After all, that’s what those impressionable university years are for.

Then Chile’s socialist CUT union came along to exploit the student protests and capitalize on the wave of turmoil around the world in order to advance their agenda.

CUT escalated the protests into violent riots. They attacked the police, they looted some shops, they destroyed some property, and they attempted (and failed) to shut down city traffic in Santiago.

All the while, the police kept a cool head. I’ve seen videos of G20 riots and austerity protests in the US, Greece, and Spain where the police mercilessly club and beat protestors into submission. That’s not how it works in Chile. 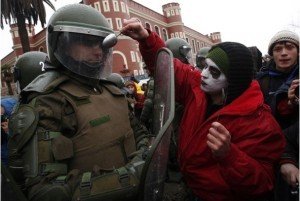 Photo by: Roberto Candia/Associated Press. How fast would this guy get clubbed where you live?

In fact, the Washington Post ran an article criticizing the Chilean government for being too soft on the protestors, saying that the government “looked powerless to curtail the anger in the streets.”

Powerless? Because cops kept their cool? The photo in the Post’s article shows a student protestor physically taunting one of the policemen at the scene. How do you think this would have gone down in North America?

Frankly I’m happy to live in a place where the police refuse to squash people like bugs… where people are not afraid of their government like they are in North America and Europe.

Yes, one person died in the riots. Considering the tens of thousands of people who were in a confined space flinging rocks in every direction, though, this is pretty much a miracle.

Things here seemed to have calmed down now, giving everyone some time to reflect on the events that transpired. Here’s my takeaway given years on the ground, my local family, and my experience in Santiago as a university professor:

1) Of the 3.5 million students in Chile, only a small percentage of them were protesting.

2) The rioters do not reflect the attitude of the nation. Recent clippings from La Tercera summed up the event as “[a] work stoppage which found no public support” and “reprehensible opportunism that the public is unwilling to accept.”

3) While there will always be people everywhere who want something for nothing, Chileans are quite happy with their economic prospects. They have no desire to return to the hyperinflationary socialist experiments of the past.

4) When things turned violent, many of the student protestors actually turned on their fellow CUT rioters and tried to prevent them from looting and destroying property. Chilean media published these accounts. Foreign media did not.

5) I credit the police here for protecting private property and dealing with the violent rioters in a very professional way.

6) Despite foreign media accounts that it was a war zone down here, most of Santiago was business as usual. Throughout the events, I was never personally inconvenienced because of what was happening.

As Simon Black often says, no place is perfect, and neither is Chile. But I have never once regretted my decision to move here. Ultimately, Chile remains a free, respectful, market-oriented, opportunity-rich country on a long-term uptrend, and that hasn’t changed one bit.