Another example of why central planning is a bad idea… 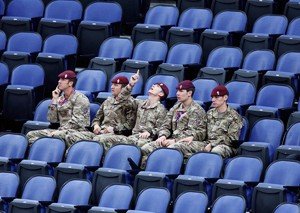 I’ve noticed something strange over the past few weeks, maybe you have too. It seems that every ‘contrarian’ website out there has joined together to collectively bash the Olympics and anyone who tunes in to watch.

This seems nuts. Nobody should feel guilty for wanting to see athletes in peak condition push the boundaries of human performance. I certainly don’t feel guilty about it. In fact I came to the UK several days ago specifically to catch some of the Olympics live.

Unfortunately it turned out to be much more difficult than I had expected.

As it turns out, the British government has centrally planned Olympic ticket issuance in a way that’s so remarkably inefficient it would make Karl Marx look like Steve Jobs.

There’s only one way to buy London Olympic tickets– through the ‘official’ office that’s controlled by the government. They’ve even solidified their monopoly by making it a CRIMINAL OFFENSE for individuals to resell Olympic tickets.

The concierge at my hotel, an affable Italian named Paulo, explained to me that the police even came around to warn (i.e. threaten) him against helping hotel guests find tickets.

Then after creating an online profile and giving them all sorts of personal information, they’ll actually MAIL (i.e. snail mail) the physical tickets to the address you give them in your profile… and only to the address of your legal residency. It doesn’t matter if you’re traveling.

The alternative is that you could spend a couple of hours going to one of the ticket offices, all of which seem to have been strategically chosen for being in the most inconvenient locations possible.

Even if you can get through that maze, they’ve really screwed up their inventory management. Nobody seems to have any idea what tickets are available at any given time. An event may be ‘sold out’ at 10am, then have hundreds of seats available by noon.

The government’s central planning of Olympic ticketing has been a complete failure, perhaps best evidenced by the THOUSANDS of empty seats at many of the events.

Annoyed beyond belief, I asked the concierge at my hotel if there were any alternatives. He said, ‘maybe’, told me to write down my phone number, and wait.

Within a few minutes, my phone started ringing off the hook with calls from ticket brokers; since the government made it illegal for these guys to sell tickets, they’ve been pushed into dodgy underground boiler rooms for the past two weeks as if they’re Prohibition-era bootleggers trying to move a shipment of hooch.

Negotiating ticket prices with these guys, I couldn’t believe we were talking about a sporting event… it seemed more like an arms deal. One guy asked me three times if I was a cop, and another refused to give me his phone number when I said I needed to call him back.

Totally crazy. The government has managed to monopolize an entire industry and screw it up with Soviet-level inefficiency… then make it a criminal offense for the private sector to fix it.

This is typical of how a government operates. They take a very cavalier attitude because they don’t care about results, they only care about maintaining control. As a result, they run their operations based on the premise that people really have no choice.

With regard to Olympic ticketing, this is mostly true. My choice was either to go through the system legitimately (albeit painfully), deal with some dodgy backroom ticket broker at three times the price, or just watch it on television.

In our regular lives, though, we do have a choice. A single government need not have a monopoly over our lives.

As human beings, we are fundamentally free. We can choose where we live, where our money lives, where we pay taxes (and how much we pay), where to structure our companies, where to hire our employees, which regulations to adhere to, etc.

And it is, by far, one of the most effective ways to take your freedom back and end your home government’s monopoly over your life.