Become a multi-millionaire… as a tax snitch

Recently, a small town accountant tipped off the IRS that his employer was shorting the government on taxes. He was rewarded with a big fat check for $4.5 million (minus a 28% federal tax withholding, of course).

I’m sure the government thinks this reward is money well spent– it represents 22.5% of the $20 million in taxes that were recovered in the case, which at face value looks like a sound investment.

Consider, though, that the recovered tax was enough to keep the wheels on the bus going round and round for 2 minutes 18.4 seconds under the US government’s $3.82 trillion budget.

US Senator Chuck Grassley, a key sponsor of the 2006 bill that beefed up the IRS Whistleblower Program, couldn’t be happier: “It ought to encourage a lot of other people to squeal,” said Grassley when commenting on the case.

Grassley is a career politician. He entered the Iowa state legislature in his mid-20s almost as soon as finishing his university studies and meeting the age eligibility requirements set by the Iowa Constitution. Now at age 77 1/2, Grassley has 52-years of experience in spending other people’s money without ever having worried about earning any himself.

He’s not alone. Most of his peers are career politicians with tenures so lengthy it is as if they are entitled to their position by birthright, regardless of the destructiveness of their decisions.

Long-time politicians like Grassley who have been in the nucleus of power for so long are exactly the sort of people who are responsible for decades of mismanagement and horrendous fiscal decision-making. And now, after running the government into the ground, what is their solution?

Apparently it’s working. I took a look at Google’s web trends to check the popularity of search terms related to “IRS informant”. Since this much publicized whistleblower story broke, the search has spiked– apparently several thousand good citizens out there are looking to sell each other out. 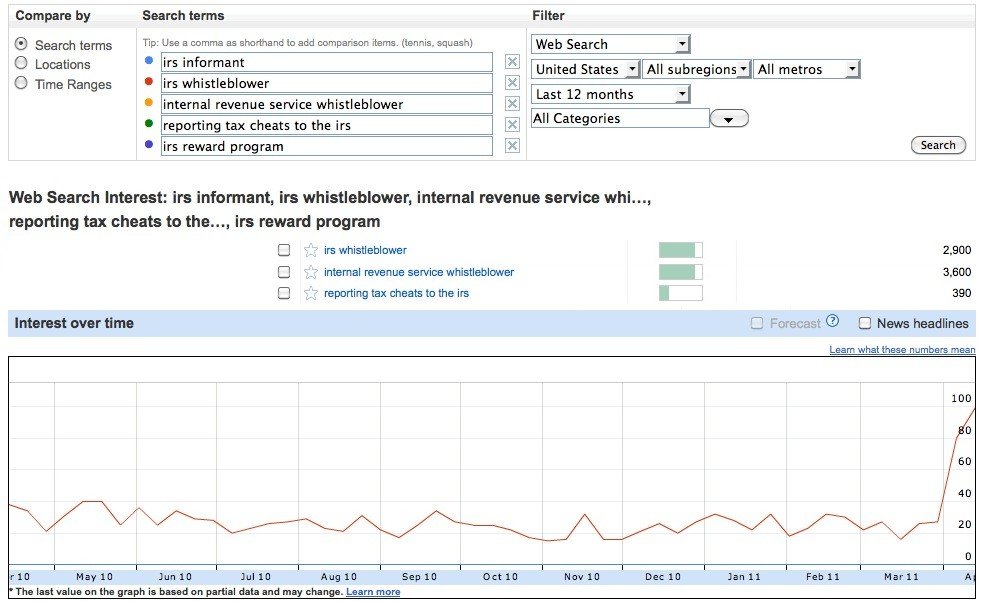 I’ve argued before that these sorts of measures are not the answer… they support fear and paranoia, and additionally provide a strong impetus to drive out productive citizens who reach their breaking point and say “finally… enough is enough.”

Snitch programs, ‘pre-crime’ enforcement, and offshore witch hunts might produce a few spare nickels here and there in revenue… but none addresses the root causes of the American fiscal disaster– namely, (1) out of control spending, and (2) measures which provide a disincentive to productivity and value creation.

This is because the fundamental malignancy that has caused so much of the global economic distortion– spending your way to prosperity, borrowing your way to wealth– is still pervasive among the national leadership, not just in the United States but in the majority of countries around the world.

In a model where spending enormous amounts of money is held in such high esteem, the only perceivable solution is to commandeer as much money as possible from the citizenry… regardless of the consequences or lack of tangible results.

Reconsidering the validity of this model in favor of a completely different approach is simply not on the table… at least, not yet. Eventually, a cataclysmic disaster (perhaps a default on the debt or run on the dollar) will force a reset in the way things are done.

The Old Guard like Grassley will be thrown out, and the entire political establishment will be revolutionized. Only then, with a clean slate, can the real recovery begin. Everything else in the meantime is just a charade.

The former Soviet Republics are a great example of this– after the fall of Communism, 15 states became sovereign nations and started over from square one… beginning with brand new constitutions, new tax codes, and in many cases, new currencies.

There’s so much garbage in the western system today, the only real solution is a complete reset. Until that cataclysmic event occurs, however, you can expect things to get much worse as the political establishment clings desperately to the existing model trying to keep the party going.

The IRS snitch program is now up for review as politicians seek to bolster the agency’s discretion to hand out greater rewards. Meanwhile, Congress is studying a proposal that could block passports from being issued to Americans who are suspected of owing taxes; the President is also expected today to announce his plans to increase taxes.

Future measures will likely include capital controls, confiscation of retirement accounts, and even possible prohibition on gold and silver (depending on how the mania stage plays out).

For individuals, I see three options:

1) Do nothing and get crushed. Believe it or not, this is what most people will end up doing… kicking the can down the road and understating the risks despite obvious warning signs in front of them. Think Poland in 1939.

2) Go dark. I know a few people who have done this and live entirely off the grid– it’s possible… but very hard, and quite lonely.

3) Internationalize. The world is a big place, and despite the intellectual malignancy that pervades most governments, there are a lot of places in the world that present a great deal of personal, professional, and financial opportunity.

Needless to say, I find the clear solution to be internationalization. This is not a strategy for the wealthy, it’s possible for anyone, regardless of age, status, or income level, to take advantage of opportunities around the globe. For example:

You get the idea. Internationalization means something different to every person… but the first step is always the same: getting over the doubt and pessimism. More on this later.