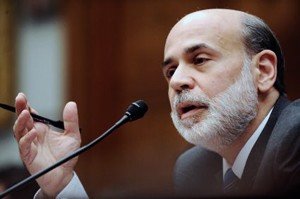 Pickens is referring to the money that is paid each year to oil exporting nations, particularly those in the Persian Gulf which raked in around $100 billion last year.

No doubt, this is an enormous transfer of wealth. But it’s a drop in the bucket compared to the TRILLIONS that Ben Bernanke gives the world’s elite.

Over the past few years, central banks have created trillions of dollars, most of which they loaned to commercial banks at 0%. The commercial banks then loaned this money to their best customers (and governments) at a slightly higher rate.

The end result is that a huge chunk of those trillions ended up in the pockets of a small handful of people. The banks and their best customers get sweetheart deals to make even more money, while the vast majority of people get screwed with inflation.

For example, the banks here in Singapore loan investment capital to their wealthiest customers at astoundingly low rates, between 0.25% and 1%! And with borrowed funds, they buy cash-producing assets which make even more money– stocks, real estate, and high-yield bonds.

Essentially they borrow at less than 1%, but generate a yield of 8% to 10% on the investment. The bank is practically giving them free money. I call this ‘philanthropy of the wealthy.’ And it starts with Mr. Bernanke.

Naturally, the average guy on the street doesn’t get these deals. Instead, he gets hit with inflation and watches his savings erode. Just this morning, in fact, they announced that Singapore’s inflation hit 4.7% in September, up from 3.9%.

This issue isn’t about rich vs. poor. Creditworthy investors are very sharp to take advantage of the opportunity. And it’s not about Singapore either, this is worldwide.

The issue lies within the system itself– that our ‘free society’ has awarded a tiny elite the supreme power to control the price of money. And in doing so, central bankers steal purchasing power from the many and benefiting the few.

The scale of this theft is in the trillions of dollars. It constitutes, by far, the greatest transfer of wealth in history, vastly exceeding America’s energy imports.

It’s an unconscionable, immoral, ridiculous game. But there’s good news– we can stop playing whenever we want. We don’t HAVE to hold their worthless currency. We don’t HAVE to keep transferring our purchasing power to an elite group. We can “opt-out”.

You see, the power they have is printing currency. So one easy way to opt out is to stop holding their paper, stop holding savings in dollars, euros, etc. Trade as much of their paper as you can for something REAL, especially physical precious metals.

And, in case one day they change the rules and try to FORCE us to hold their paper, it’s best to store your metal in a safe jurisdiction overseas, out of their reach.

More on that tomorrow.