Chongqing: The largest construction site in the world

[Editor’s note: Tim Staermose is filling in for Simon today with another boots on the ground report from China.]

By some accounts, Chongqing is the largest metro area in the world with a population of some 32 million. They ought to call it the largest construction site in the world.

This is a place that, if you believe the official numbers, posted 17% GDP growth in 2010. It doesn’t take too long to figure out how that happened. Driving around town, I found that Chongqing is in such a building frenzy, they’re actually tearing down perfectly good (and reasonably new) buildings and infrastructure, and rebuilding them.

To give you an example, next to my 45-story downtown hotel was a building site where the constant drone of jackhammers signaled to me that there was some breaking of concrete going on. The new tower under construction had reached the 11th floor, but then they decided to tear it down and start all over again with something even bigger (102-stories).

[There are a half-dozen other such towers in Chongqing. Most of them are officially “on hold,” signaling to me that China is getting ever closer to facing its bubble reality– that demand simply cannot support such investment.]

Then there are the pavement workers… half of them digging up the road, 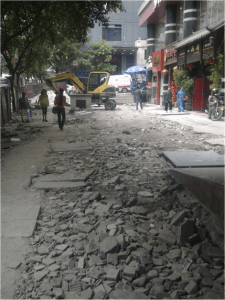 half of them putting it back together. 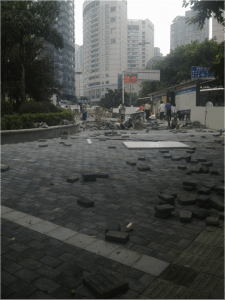 It is the literal equivalent of digging ditches only to fill them back up, all in order to create employment.

The government certainly hopes that actual businesses will come to Chongqing to mop up all the excess productive capacity that they’re building (and then tearing down and rebuilding).

Chongqing is, in fact, at the epicenter of the “Go West” drive in China, whereby manufacturers along China’s coast are being encouraged to move their production facilities inland to take advantage of the untapped labor pool and cheaper all-around costs of doing business.

Curiously, Ford Motor Company is one of the region’s cornerstone investors. The company’s biggest concentration of production plants outside of Detroit is in Chongqing. Ford aims to use the city as its beachhead in China where its market share currently languishes at a paltry 2.6%.

Perhaps in the years and decades to come, dozens, even hundreds of businesses will relocate to Chongqing. Maybe the Chinese have it all figured out and are thinking 25 years in advance. But today, it’s hard to see how ripping down buildings and roadways (and replacing them with ghost towers and the exact same roadways) could prove to be a worthwhile investment.

A half-built building is a liability. A completed building sitting empty is an even bigger liability. These aren’t signs of clever planning, but of wasteful misallocations that are starting to crack the facade of the Chinese economy.

So much superfluous construction did create temporary economic growth… but now you can see the visible signs of unemployment rising. The sheer volume of downtrodden and destitute Chinese on the streets, coupled with rising consumer prices and declining output, all suggest that deep instability is looming.

The Chinese have an old proverb: “Keep your broken arm inside your sleeve.” They have been telling lies to the world and masquerading as an economic miracle for years, but the signs of stress are showing.

Yes, China does have the right kind of potential with over a billion people, substantial productive capacity, and a high savings rate. But these dizzying growth rates have been a total illusion. With so much of the world’s economic hopes pinned on the continued fantasy of 10% growth, it’s going to be a hard landing for everyone once China’s reality sets in.