US Department of Labor now reduced to Soviet Propaganda Ministry

In one of the most shamefully disingenuous reports we’ve seen in years, the US Labor Department released the latest employment figures on Friday showing that the headline US unemployment rate had fallen to 8.3%.

Champagne and sound bites were pre-positioned in Washington as the self-congratulatory praise flowed like the bubbly. President Obama, beaming like he’d just caught the winning touchdown pass, told the American people on Sunday that he ‘deserved’ a second term.

They call it the headline unemployment rate for a reason… it’s the only number that the papers tend to run. All weekend long, mainstream press ran headlines like:

[Note: I highly recommend that you read ZeroHedge.com, one of the only sources of undistorted economic reality on the Internet.]

It’s the same Orwellian style logic (WAR IS PEACE. DEBT IS WEALTH.) that prevailed during the Soviet Union– outright lies and deceitful reports painting a rosy picture of the economy and its glorious leaders, masking a dismal reality. It’s nothing but propaganda in the worst form.

This has been going on for years in the United States, as evidenced by the chart below:

The blue line shows the steady, upward trend of Americans who are no longer counted in the labor force since the onset of the financial crisis. The pink bars (and black line) show the steady decline in the proportion of society that is included in the work force (i.e. either employed or unemployed).

The government’s own numbers show that, since 2008, they’ve stopped counting 9 million Americans in the employment report– that’s over 11% of the entire work force which simply vanished in just 4-years.Even the most casual glance at the data shows that the employment report is a complete and total fraud– no more relevant than Soviet statistical propaganda indicating a miraculous rise in per capita sugar consumption… despite widespread starvation and ubiquitous bread lines. 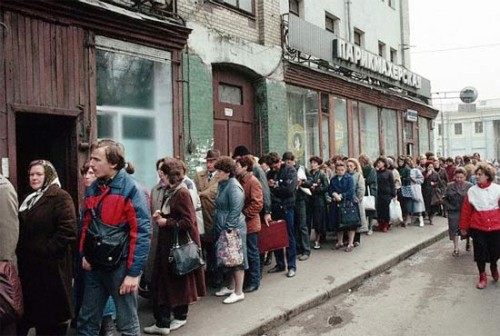 Two months ago, President Obama sat down with Steve Kroft of 60 Minutes for a chat about the economy. At one point, Kroft asked, “You think you might have the unemployment rate down to 8% by the time the election rolls around?”

Or if that doesn’t work, fraud and propaganda are apparently just as effective.  Have you hit your breaking point yet?