Guangzhou South Station: something out of a zombie movie

When I left my hotel bound for the new Guangzhou South Station the other day , I didn’t know much about the station– where it was, how far from the hotel, etc. After about 25 or 30 minutes in the cab, I still hadn’t seen any signs for the station and grew concerned that the cabbie was just taking me for a ride.

As we eventually approached the station, I began to understand why it was so far out of town.  Clearly, the only way they could find enough contiguous land to build this monstrosity was to go WAY into to the outskirts of the city.

In the end, it was a 27.82 kilometer (17.39 miles) cab ride from my downtown hotel, and took 49 minutes to get there.  I know this because Chinese taxis are very efficient and give you a highly detailed receipt.

Guangzhou South Station is absolutely COLOSSAL.  By comparison, it is much bigger than any of the 3 international airport terminals in Manila where I live… and I’d say it’s over 8 times larger than the Central Airport Express Station in Hong Kong.

For a start, the Guangzhou South Station is built on THREE levels.  I was dropped off at level 2.  When I entered there was an “Information” booth straight ahead.  It was unstaffed.  In fact, the entire second level was completely deserted.  Very spooky. It was something out of a low-budget zombie movie. 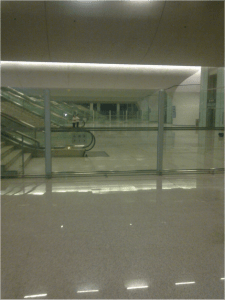 I went downstairs to the ticketing area where there were a few signs of life. Of the forty or so ticket windows, well over half were closed, and there were only a few dozen people mulling about. To give you an idea of density, imagine the largest football stadium you can think of with only a few hundred people inside. Ghost town. 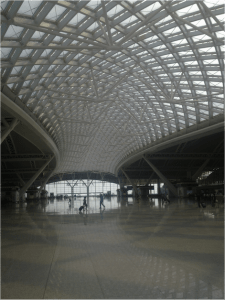 With ticket in hand, I went up to the departures area… it defies logic that you have to go upstairs to departures even though the trains are at the ground level, but my guess is that the Party really wanted to build a third level just to heighten the grandeur of the train station.

Now, you’d think that if they spent so much money building a station this large, they would be expecting hundreds of trains steaming in and out at all hours of the day. Not by long shot. There was only one train at the platforms. Mine.

It was the same zombie movie theme– areas the size of multiple football fields with hardly any passengers standing around.  And yet, throughout the entire station over all three levels was expensive, high quality marble tiles and artistic finishings, all polished to a mirrored shine.

Guangzhou South Station is truly a monument to excess, exemplifying China’s ruinous “build it and they will come” attitude.

When I arrived to Wuhan about 4-hours later (going 300 km per hour on the high speed bullet train), it was the same theme: acres of empty space, hardly a soul in sight, yet all very modern and marbled with dozens of elevators and abandoned information booths. When my train pulled in, it was the only one at the platforms.

Frankly, the whole episode reminded me of Bangkok and Hong Kong airports during the SARS epidemic back in 2003.  I observed this firsthand– passenger traffic cratered because most people were scared silly of catching the deadly virus, and major airports were practically empty.

Similarly, it’s what you would expect Grand Central Station to look like after a flesh-eating virus outbreak.

It’s interesting to note that China’s National Audit Office (NAO) recently published a report which says the country’s outstanding local government debt is now equivalent to $1.7 TRILLION. That’s a huge figure — about 27% of China’s GDP in 2010.

Because the NAO’s figure was based only on a sampling of 6,500 local government-backed financial vehicles (out of more than 10,000 such vehicles nationwide), the actual magnitude of local government indebtedness is likely to be much greater.  China’s own Central Bank estimates the number to be 30% higher than the NAO figure.

All of this certainly begs the question– how many more empty buildings and unused train stations can they possibly build?  More importantly, what happens to China’s economy when all this fixed asset spending starts to subside?  I’ll explore these questions more in the coming days… but in the meantime, I’d like to hear what you think about it.