Guess which empire came to an end today?

In the early 16th century, a priest by the name of Fray Francisco de Ugalde remarked to his king that Spain was “el imperio en el que nunca se pone el sol”.

In other words, the sun never set on the Spanish Empire.

And by the 1500s with its vast lands across the Americas, Africa, Europe, Asia, and even the South Pacific, Spain (technically the House of Habsburg) had become the first truly global superpower.

The Empire’s status was so great that its silver coin (the real de ocho or piece of 8) was used around the world as a global reserve standard… including in the US colonies.

Like so many great empires that came before, Spain was beset by unsustainable spending, constant warfare, debilitating debt, and an inflated money supply.

By the mid 1500s, the Spanish government was spending 2/3 of its total tax revenue just to pay interest. Spain defaulted on its debt six times in the next century.

Historians can literally circle the date on a calendar that Spain ceased being Europe’s dominant superpower; it was the day that Spain lost the Battle of Rocroi, and effectively the Thirty Years War against France.

Just days before, a four-year old Louis XIV had ascended to the throne to become the King of France after the death of his father.

And during his whopping 72-year reign, France replaced Spain as the global superpower.

(To put this reign in context, the longest serving monarch alive today is King Bhumibol of Thailand, who at age 86 has served for 67 years. At age 88, Queen Elizabeth has served for 62 years.)

For more than a century, commerce, art, and technology flourished in France. And some of the greatest intellectual minds in history published their works during this period.

I remember being told as a West Point cadet that in the early days of the Academy in the 1800s, the only two classes were French and Mathematics, primarily because all of the great textbooks were written by French mathematicians.

France had public healthcare and free hospitals. Great monuments to their grandeur. Colonies around the world. An awe-inspiring military.

And their influence was so great that foreign governments from Russia to Prussia spoke French internally.

Needless to say, this didn’t last either.

And like the Spanish before them, France overspent, overexpanded, and overregulated. They waged excessive warfare, and they managed their affairs as if the good times would last forever.

By the 1780s, the French debt had grown so much that they were rapidly devaluing the currency and borrowing money just to pay interest on what they had already borrowed.

The US is in a similar position right now, along with most of the West (including… France and Spain again!)

Powerful nations believe they can borrow indefinitely and dilute their currencies without consequence.

This simply isn’t true. Wealth and power shift. The world’s reserve currency changes. It’s been happening for centuries, and this time is no different.

We are all witnessing this change unfold again. And this isn’t some wild assertion.

Objective data from the Bank for International Settlements and the International Monetary Fund all show a clear decline in the dollar’s share of global reserves. 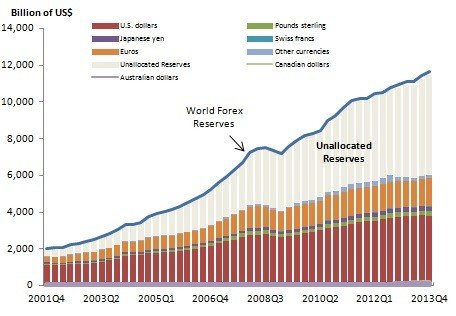 And even in their most optimistic projections, the government tells us that growth in debt will outpace growth in tax revenue.

Day to day, it’s easy to ignore these trends. But from a big picture perspective, it couldn’t be more obvious.

Just like the Battle of Rocroi in 1643, or the storming of the Bastille in 1789, there will come a time when future historians circle a date on a calendar and say, “That was the day the United States ceased being the dominant superpower.”

Perhaps it’s happened already. Or perhaps it will occur in a war yet to be fought.

But if history, common sense, and truth are any guides, that reckoning is quickly approaching.