Guest post: So long; thanks for all the stress

Date: December 14, 2011
Reporting From: London, England
[Editor’s note: Simon’s friend Tim Price is a delightfully witty fund manager in the UK, one of the few free-thinking individuals in all of institutional finance. His recent thoughts below on the euro debacle, gold, and hyperinflation are some of the best ever written on the topics.]

“Helmut Schlesinger, the Bundesbank president in 1992, was asked why he disliked the precursor of the Euro, which was called the Ecu. He replied, “I have nothing against the Ecu apart from its name – I think it should be called the Deutschemark.”

So the UK doesn’t get to join the great euro zone leper colony. Oh well. Tant pis. Tja. As Captain Blackadder once said, we lost closer friends the last time we were deloused, and were more wounded the last time we clipped our toenails. If we could summon up the mental energy to care about Europe we might bother to cite the perhaps apocryphal British newspaper headline that once read:

“Fog in Channel; Continent cut off.”

As regular readers will attest, we have long approvingly cited the work of Albert Bartlett, emeritus Professor of Physics at the University of Colorado at Boulder. Professor Bartlett regards sustainable growth as a contradiction in terms, and has voiced at least two startling opinions on the topic:

“The greatest shortcoming of the human race is our inability to understand the exponential function.”

And he has asked,

“Can you think of any problem in any area of human endeavour on any scale, from microscopic to global, whose long-term solution is in any demonstrable way aided, assisted or advanced by further increases in population locally, nationally or globally?”

Such views are unfashionable, of course (although some have referred to them as fashionably declinist) – we are somehow meant to believe that perpetual growth is not just desirable but essential, and that the planet can cope with an infinite number of people despite its obviously finite resources.

The problem with the perpetual growth fantasy is that when the world has accumulated so much debt that its major economies are incapable of growing even at a rate sufficient to service that debt, not only does the growth dynamic run into reverse, but the debt deflation dynamic ensures protracted and painful economic contraction.

Whatever insecure Gallic dwarfs or intransigent Teutonic socialists might think, size – in politics or common currency blocs – is not automatically a good thing. More to the point, as JP Morgan’s Michael Cembalest points out (hat tip to M. Arnaud Gandon), there is disturbingly little “commonality” amongst the disparate cultures that make up what we used to call the European common market.

The chart below shows DNA mappings of European citizens (courtesy of “Correlation between genetic and geographic structure in Europe?” Current Biology Magazine, August 2008). While genetic variations were relatively small, those variations were tied very closely to geography.

As Mr Cembalest points out, by grouping similar DNA results together, we get something that looks very much like a map of Europe – a map that reflects “hundreds of years of migration, weddings, funerals, births, language, values passed to children, circumstances that call for charity, sacrifice, revenge and everything else that define ‘culture’.” 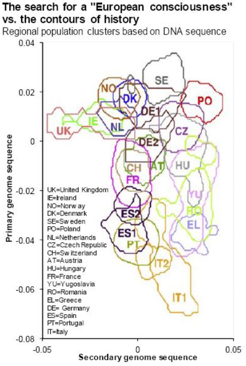 In Cembalest’s words, “The map shows clear patterns of ancestry tied to geography, which is perhaps why the EMU was designed to retain the region’s fiscal, economic and cultural identities. Perhaps we should not be surprised that Northern Europe is struggling with whether it will mortgage its future to save the South.”

Cembalest asks, crucially, whether the “will” is even there. “In terms of shared experiences and values measured by anthropologists, and the contours of history implied by genetic research, they may not have enough in common. It took almost 150 years for the US to reach the same point in its history, when it began to cede more control to a Federal, centralized government.”

Another avowed euro sceptic, before the fact, was Leopold Kohr. Kohr was an Austrian Jew who only narrowly escaped from Hitler’s Germany just before the war. The village in which he was born, Oberndorf in central Austria, with a population of just 2,000 or so, would – in its lack of size – come to play a crucial role in Kohr?s thinking.

Kohr graduated in 1928 and went off to study at the LSE with the likes of fellow Austrian thinker Friedrich von Hayek. In 1938 he decided to leave Europe for America, and despite being told it would take two years to get the appropriate documentation and book a passage, managed the feat within a week.

He would make North America his home for the next 25 years.

In September 1941 Kohr wrote the first part of what would become his masterwork, “The Breakdown of Nations”, arguing that Europe should be “cantonized” back into the sort of small political regions that had existed in the past and that still persisted in places like Switzerland. “We have ridiculed the many little states,” he wrote sadly, “now we are terrorized by their few successors.”

The essence of “The Breakdown of Nations” is the problem of scale. Size matters. As Kirkpatrick Sale writes in his foreword to the book,

“What matters in the affairs of a nation, just as in the affairs of a building, say, is the size of the unit. A building is too big when it can no longer provide its dwellers with the services they expect -running water, waste disposal, heat, electricity, elevators, and the like- without these taking up so much room that there is not enough left over for living space, a phenomenon that actually begins to happen in a building over about ninety or a hundred floors.

A nation becomes too big when it can no longer provide its citizens with the services they expect -defense, roads, post, health, coins, courts and the like- without amassing such complicated institutions and bureaucracies that they actually end up preventing the very ends they are attempting to achieve, a phenomenon that is now commonplace in the modern industrialized world.

It is not the character of the building or the nation that matters, nor is it the virtue of the agents or leaders that matters, but rather the size of the unit: even saints asked to administer a building of 400 floors or a nation of 200 million people would find the job impossible.”

In the words of Albert Bartlett,

“Continued growth past maturity for any entity becomes obesity or cancer.”

Kohr shows that there are unavoidable limits to the growth of societies. As he puts it, “social problems have the unfortunate tendency to grow at a geometric ratio with the growth of an organism of which they are a part, while the ability of man to cope with them, if it can be extended at all, grows only at an arithmetic ratio.”

In the real world, there are finite limits beyond which it does not make sense to grow. Kohr argues that only small states can have true democracies, because only in small states can the citizen have some direct influence over the governing authorities.

When asked what had most influenced his political and social ideas, Kohr replied:

“Mostly that I was born in a small village.”

The euro zone is an object lesson in an unwieldy, oversized political construct haphazardly cobbled together amongst irreconcilable cultural entities. Wherever something is wrong, wrote Kohr, something is too big.

The answer is not to grow, embracing ever more disparate states within a dysfunctional currency union with make-it-up-as-you-go-along rules. The answer is to stop growing. The euro zone economy will have ample opportunity to learn that lesson in the coming months and years.

The answer to the “too big” problem lies not in ever-greater union, but in division. And if the larger states in Europe ultimately decide that the political union is more than their societies can bear and that what they really want, yet again, is to slaughter each other, they should not expect Britain to wade in to the abattoir and join them.

French officials apparently described Prime Minister David Cameron’s efforts to protect Britain’s national interests during last week’s talks as “like a man who wants to go to a wife-swapping party without taking his own wife.” Nice image, that doesn’t at all play to the stereotype that all Frenchmen are untrustworthy Lotharios.

That should go down well with the female members of the euro zone electorate. As “The Sun” once tastefully put it, Up Yours, Delors.

Tim Price is Director of Investment at PFP Wealth Management in the
UK. PFP is an independent wealth management partnership with over 20
years’ experience of institutional and private client investment
management. Tim is a specialist in low risk, multi-asset, absolute
return investing and has enjoyed success in the UK Private Asset
Managers Awards programme, having been shortlisted for five successive
years, and was a winner in 2005 in the category of Defensive
Investment Performance. He was also shortlisted in the 2007 Spear’s
Wealth Management Awards in the category of Asset Manager of the Year.
He is a regular contributor to Money Week magazine in the UK and to
other financial media.