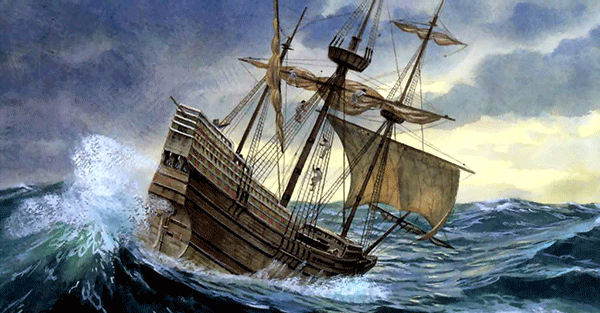 For most it was their first time on a ship. And now they were trapped on board for weeks to endure storms and seasickness on the high seas.

Packed together like sardines in tiny, rat-infested cargo holds with unappetizing provisions and a constant stench of human waste, early settlers (expatriates) had every reason to not be on those ships.

But there was something far more important than their comfort on board, something which superseded all the risks and uncertainties they were taking: the freedom and opportunity that awaited on the other side of the ocean.

In leaving for the New World, people hoped to escape a system back home that was completely rigged against them.

They had little freedom, few prospects, and a future with almost no security.

And in order to get away from this, a handful of courageous settlers were willing to risk everything… from the known perilous journey to the unknown risks of what awaited them on the other side.

It took weeks on a treacherous voyage across the ocean. And even once they reached new shores, only then did the hard work of establishing shelter and building up a supply of food really begin.

For at least a handful of people (many of our ancestors), it was worth plunging into the unknown to have a fresh start and the ability to truly live free on their own terms.

Today many folks are faced with a similar quandary. They can’t stand what’s happening in a country that increasingly looks like an alien planet. And they yearn for a freer life on greener pastures abroad.

But fear of the unknown is an incredibly powerful force.

It creates inertia. It’s what makes people stay in bad (or even abusive) relationships. It’s what keeps people working unfulfilling jobs for bosses they despise in environments that suffocate them.

So many people have a voice deep down calling out for them to make a change. But we’re held back by this inertia, fear of the unknown… and more often than not, all the risks we’ve heard about our entire lives.

It’s amazing how much ignorance and misinformation there is out there about the rest of the world.

Mainstream TV makes it look like every country outside of the US, Canada, and Western Europe is the backdrop for a Feed the Children commercial, devoid of basic necessities like running water.

Then, of course, there are legions of citizens, many of whom don’t even have a passport, who wax philosophically about dangerous places overseas that they’ve never been to.

All of this builds the inertia and keeps us rooted.

But the reality is that picking up and leaving is really not so scary. Everything pales in comparison to what our ancestors had to deal with.

Today, we can fly across the globe in a matter of hours. We can do substantial research online and get to know people in far away places before we even arrive.

Sure, there’s still plenty of unknown. You don’t know how to get your mobile phone turned on, or where the best deal on discount tires is, or who brews the best pot of coffee in town.

But all that comes in time. And not that much time, to be honest.

Soon, many new expats quickly find that their lifestyle is far more fulfilling than they ever had back home.

They have a closer, tighter network of like-minded friends. They’re more active, more involved. They feel healthier and spend time in a much more suitable climate.

No, life is not perfect. It’s not all cookies and unicorns. But most of all folks often feel happier and more free.

It’s incredibly liberating to discover that you’re no longer a tax slave whose sole purpose is to feed the Beast, or that the news back in your home country no longer impacts you.

Suddenly you become an amused and disinterested spectator instead of an unwilling participant.

Plunging into a new life abroad shouldn’t be a scary proposition anymore. There’s a world of opportunity out there.

It’s almost 2015. You no longer have to enslave yourself to geography to make a living. It’s possible to earn income far away from your job, your employees, and even your customers.

And you just might find rather interesting entrepreneurial opportunities in your new home.

(Fast-growing markets are often teeming with compelling business opportunities—things that are second nature to you, but still very foreign to your new neighbors.)

There is life out there. And all of the obstacles are in our minds.

So the next time you find yourself disgusted by the system you live in and you’re concerned about your family’s future, remember: our options are far greater and far easier than our ancestors’.