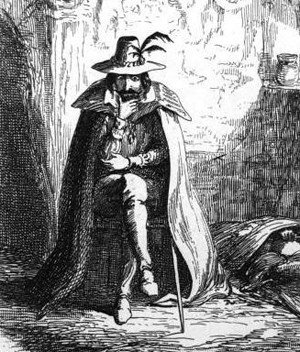 Just over 400-years ago today, a group of 13 conspirators was caught trying to assassinate King James I of England and blow up the House of Lords in what became known as the Gunpowder Treason.

If you’ve ever seen the movie V for Vendetta, you know the story. Guy Fawkes was found underneath the House of Lords with three dozen barrels of gunpowder… and to this day, his effigy is still burned annually in commemoration of the event.

Fundamentally, the Gunpowder Treason was about freedom. The English monarchy at the time was controlling nearly every aspect of the economy and their subjects’ lives– from what they could wear to how they could worship.

“Sumptuary laws” which regulated private behavior were commonplace. Elizabeth I, for example, re-introduced a beard tax on all facial hair grown in excess of two weeks. She also published long lists, categorized by social class, dictating precisely what color and type of garment her subjects were required to wear.

It turns out these sumptuary laws were just an early form of state-sponsored corporate welfare; the English textile industry had paid Elizabeth huge sums of money in exchange for royal decrees about knitted caps and woollen socks.

As a consequence, a great deal of English labor and disposable income was mis-allocated towards silly garments instead of being put to more productive uses… and the country was in an almost perpetual state of stagnation.

Not to mention, English finances deteriorated under Elizabeth. By 1600, state expenditures were 23% greater than tax revenue, which would be the equivalent of a $550 billion budget deficit in the US today. Not exactly a trivial figure.

James I, Elizabeth’s successor, continued to spend extravagantly and in-debt the English economy, often showering taxpayer funds on a handful of favored nobles.

By the time James’s successor Charles I came to power, the monarchy’s credit was running so thin that Charles had to force people to loan him money; those who refused were imprisoned and had their property confiscated.

Unsurprisingly, civil war broke out in 1642. Charles I was executed in 1649, and the genocidal dictatorship of Oliver Cromwell dominated England for the next decade.

When you think about it, this collapse was inevitable. For decades prior, the entire English economy was under the control of a single individual who massively indebted the state, impeded growth, and reduced people’s individual freedoms. Not exactly a recipe for long-term success.

The Gunpowder Treason of November 5, 1605 may have been a failure for the conspirators, but given enough time, a system so screwed up, so unsustainable, was destined to collapse on itself.

Curiously, we’re not so different in the west today. We have our own sumptuary laws, regulating everything from tobacco consumption to what foods we can/cannot eat. We have our own state-sponsored corporate welfare. We’re comically indebted.

And just like the English monarchs, we have a tiny elite that controls absolutely everything about our economy– taxation, regulation, and the supply of money.

Needless to say, this is also unsustainable. And history shows that these types of unsustainable systems will always collapse under their own weight. We’re not so different… and tomorrow, I’ll mathematically prove it to you. More to follow.