One of the local papers here in Chile ran an interesting story a few days ago about the number of young Spanish immigrants coming to Chile in search of work.

Fed up with the ridiculously high unemployment rate in Spain, and tired of being shut out of every single opportunity imaginable, a handful of intrepid young souls is starting to look for greener pastures abroad. And increasingly, that journey is bringing them to Chile.

The report, published in El Mostrador [Spanish-language], profiles several young people who’ve left Spain’s roughly 50% youth unemployment rate. Stymied by the lackluster prospects in Europe, and the even worse prospects (and visa challenges) in the US, they’ve set their sights on Latin America.

Most found success in Chile’s rapidly growing economy where skilled, energetic young people are in demand. For some, the opportunities here in Chile were so plentiful when they arrived that they encouraged their friends and families back home in Spain to hop a flight and make a change for the better. 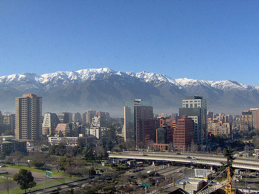 Like America of the past, Chile is a country that’s friendly to productive, responsible,  hard-working people. It’s very easy to obtain a residency visa and work permit– all you need is a work contract from just about any local company, and you’re entitled to what’s called a “sujeto a contrato” visa.

This particular visa is renewed after one year. After the second year of continuous employment, you’re entitled to permanent residency. Three years later, you can apply for naturalization and a Chilean passport, as long as you meet minimum time-in-country requirements.

Best of all, you don’t even need a lawyer. Compared to what I’ve seen in Europe and North America, the red tape involved in the Chilean immigration process is minimal; local companies in Chile have tremendous latitude in hiring foreign workers without the government getting involved.

I personally know a number of foreigners who have moved to Chile and obtained work visas in this way– South Africans, Americans, Canadians, Spaniards, French, Brits, Russians, Chinese…

One Cuban acquaintance of mine managed to escape the Castro absurdity 3 years ago. Rather than stow away for Miami, though, she opted for a much longer journey, making her way to Chile.

She eventually found a job with a Canadian mining company (an English-language environment) based here. This is remarkable when you think about it– that a foreign company can come to Chile and hire non-Chileans with ease.

In the article, Chile’s Labor Minister Bruno Baranda confirmed his government’s openness to foreigners, indicating that there is a major shortage of laborers, skilled workers, and professionals in mining, construction, and agriculture.

I can personally attest to the shortage of agricultural workers– it’s been extremely difficult to find so much as a day laborer in the town near our farm despite the premium wages we’ve been offering. As a result, I’m considering bringing in additional manpower from abroad under the ‘visa a contrato’ scheme.

Furthermore, agricultural professionals in my area like agronomists and irrigation specialists are often booked weeks in advance… another interesting indicator of the opportunities down here.

I’ve been saying this for a while now, but I’ll say it again: if the job market looks bleak where you are, take matters into your own hands… especially if you’re young and facing absolutely zero prospects. Get your feet wet abroad– the opportunities are much brighter, and the experience can be life-changing.

There are a lot of places in the world where foreigners can come to thrive– others include Singapore, Qatar, Mongolia, several places in the Caribbean, the United Arab Emirates, and many more. Chile just happens to be one of my favorites… and if you take a look at this short video, you’ll understand why.