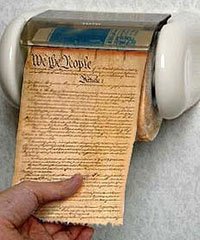 On June 10, 1215 AD, after prolonged rebellion and frustrating negotiation, a group of England’s most influential barons entered London to force the disastrous King John Softsword into accepting a revolutionary charter of individual freedoms.

Five days later in the Runnymede meadow of Surrey County, John affixed his royal seal onto what became known as the Magna Carta. It still exists on the books today in England and Wales.

This document was one of the more important antecedents to the US Constitution; its proclamations ended the absolutism of England’s monarchy and spelled out very clear rights and freedoms, including, among others, the right of a man to enjoy his private property without trespass from government officials.

Over 550 years later, the framers of the Constitution codified this right in the 4th Amendment to be secure in one’s private property.  Last week, the Indiana Supreme Court effectively rejected both documents in two separate cases.

In the first case of Lacey v. State of Indiana, the Court ruled that police officers serving a warrant on a private home may simply walk right in without knocking.

The second case of Barnes v. State of Indiana is far more startling. The case deals with one Richard Barnes, a regular Joe citizen of Indiana, who was in the midst of marital problems with his wife one evening in 2007. The couple was arguing when police arrived to the scene and attempted to enter the home.

Barnes made it very clear to the officers that they were not to enter his home. The officers did not have a warrant, and they did not have probably cause to believe that anything illegal was happening. But they entered regardless.

Barnes tried to block the door, and as the police officers muscled their way past him, he shoved one of them against the wall in defense of his property.  Barnes was choked and tasered in his own home, subsequently hospitalized, then charged with misdemeanor battery on a police officer.

The case went to court, and the Barnes defense team cited a private citizen’s right to resist unlawful entry into one’s home. They lost. The case was appealed, all the way up to the Indiana Supreme Court. Here’s where it gets interesting.

Seems pretty cut and dry, no?

Yet, in summarizing the court’s opinion, Justice Steven David writes, “We hold that there is -no right- to reasonably resist unlawful entry by police officers.”

Wait. Full stop. A citizen has no right to resist unlawful entry by police officers on his private property? Apparently we’re all supposed to lay down like two-toed tree sloths while these jackbooted monkeys turn private property into yet another ‘rights free’ zone.

Americans already have to put up with dispensation of the Constitution at airports, border checkpoints, political events, many train station, and soon to be bus terminals and shopping malls. We’d better add ‘private residence’ to that list as well.

The right to protect oneself and one’s property against unlawful entry is the hallmark of any free civilization.  Conversely, it is the hallmark of a totalitarian police state when government goons have the authority to go stomping around on private property without oversight of a judicious, impartial court.

There is no middle ground here… and a government that is on the way to denying this right is not far down the road from denying other basic, seemingly no-brainer rights– like assembly, criticizing the government, and possession of firearms.

One of the reasons I travel so much is so I don’t have to deal with this kind of nonsense. I enjoy spending time in countries where I have no fear of some government agent forcing his way into my home.

There are a number of such places in the world– Chile is definitely one of them.