Is silver finally bottoming out? 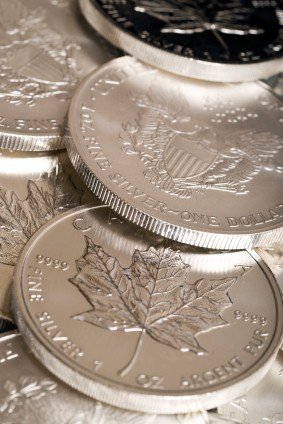 Over a year ago, I penned an article entitled “4 Silver Investments to Avoid.” About two weeks later, on April 26th, I wrote another article: “Should I Sell My Silver?” saying that I expected an imminent correction in the silver price, after it had gone “parabolic.”

It caused quite a stir at the time. There was no shortage of people calling me delusional for suggesting the bull market in silver was overdue for a pause. Some even labeled me a “traitor,” presumably to the “hard money” movement.

One of the silver companies I recommended to NOT buy immediately contacted me after the article was published, insisting there was nothing to worry about, and that their stock was a great investment.

For the record, since then, the price of silver is down 35.2% (based on the London PM fix). And of the four silver investments I said to avoid:

One of the biggest headwinds for the gold and silver markets right now is the weakness in India’s economy and currency.

As the Indian economy slowed rapidly over the past 12 months, the Indian Rupee swan-dived. Today it takes more than 57 rupees to buy one US dollar, up from 46 a year ago.

That makes the price of silver (and gold), which is priced in US dollars on world markets, much higher for Indian buyers.

Demand has dropped accordingly– silver bullion sales volumes in India are off between 30% and 40% versus a year ago.

Nonetheless, the weakness in India’s currency, which has also been undermined by political uncertainly, is a perfect illustration of why it pays to hold silver and gold in the first place.

Indian savers who entrusted their savings to banks and kept their money in rupees have been at the mercy of the sliding currency.

Those who bought and held precious metals, on the other hand, have seen their purchasing power hold steady, even as the rupee tanked.

While the US dollar may again be enjoying a period of relative strength, this is almost certain to prove temporary.

And just like Indian savers who kept their money in rupees, trusting your money to the government will be a losing proposition in the long term.

Holding your money in US dollars, particularly in some insolvent, illiquid bank earning one-half of one percent interest, will result in the destruction of your purchasing power.

If you agree with that thesis, the question still remains, what’s a good price to exchange your dollars for physical silver at?

To be fair, nobody can accurately divine the short-term movements in precious metals prices. But from a purely technical standpoint, silver is starting to look very interesting. 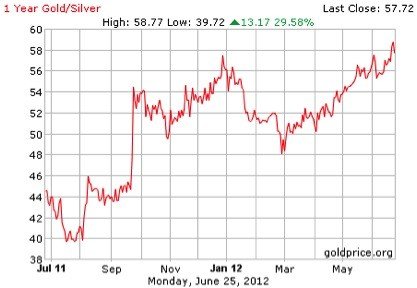 The gold/silver ratio has been clobbered over the past year in an almost uninterrupted pattern except for a brief respite in early 2012.

At the peak of the last precious metals boom, it took fewer than 20 ounces of silver to buy one ounce of gold. Over the past few years, the ratio has dipped as low as 32. But today the number has blown out 57.

If the thesis holds that we are in another precious metals boom, it certainly stands to reason that the gold/silver ratio ought to correct and become much lower once again.

More importantly, however, every single indication out there suggests that central bankers will continue doing… the only thing they know how to do: PRINT.

Despite some short-term corrections (as we saw in 2008), this is no doubt bullish for precious metals… and especially silver.

Given silver’s already steep decline from its highs last year, a price in the mid-$20s range is beginning to look very compelling.