Looking for a second home? Put this country on your radar 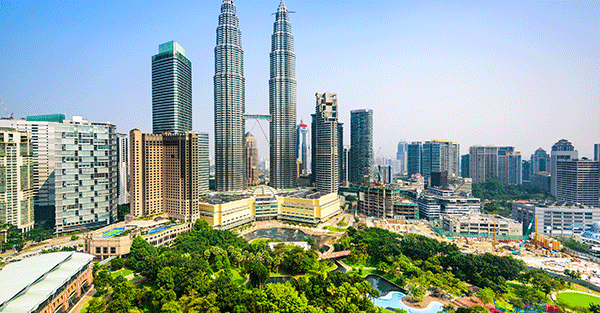 Nothing quite shocks the senses like the colors, smells, spices, and prices of Asian street food.

Some of the tastiest (and most bizarre) things I’ve ever had in my life were consumed on the streets of Asia, for a cost of almost nothing.

From China to India, Myanmar to Malaysia, street food is a great metaphor for this entire region: exotic, deceptively flavorful, and incredibly cheap.

Kuala Lumpur is no exception. Sure, the street food is great. But the city itself is surprisingly well developed.

In fact Kuala Lumpur boats some of the most advanced first world infrastructure in the region. Yet it remains an incredibly cost efficient place to live.

For example, the fairly new KLIA express train that transports passengers between the airport and city center in just 30 minutes (the airport is a loooong way from town) is just as good as the airport express in London and Tokyo. Yet it only costs about 12 bucks each way.

The quality of medical care is very high in Malaysia. But it’s so cheap that this country has become a major destination for millions of medical tourists.

Real estate in Malaysia has also long been one of the best deals in Asia; it’s far cheaper to buy in Malaysia than in Singapore or Hong Kong.

And in many respects it’s cheaper to buy property here than even in Thailand, even though Malaysia is more developed.

What’s more, it’s also possible for foreigners to actually purchase real estate and own title to the property in Malaysia, which is highly uncommon across Asia.

Starting around 18 months ago, the local currency (the ringgit) plunged 33% against other major currencies like the US dollar, NZ dollar, and Swiss franc. So for many foreigners, Malaysia has become even cheaper.

That’s why it may be a good idea to keep this place on your radar– it’s an excellent balance of quality versus price.

Plus the country is diverse enough to provide a range of options; in fact, just outside this sleek, modern capital city, you’ll find gorgeous beaches, imposing mountains, and just about every landscape to suit your desires.

Through the Malaysia My Second Home program, for example, people over the age of 50 can receive a 10-year visa by demonstrating basic financial solvency.

The nice thing about this is that your foreign income is not taxable in Malaysia, so it can be quite a tax efficient choice of residency.

That said– Malaysia is far from perfect and it’s important to understand the drawbacks.

First off, this place is legendary for its corruption, and it starts at the top.

The current Prime Minister Najib Razak was found by an investigative team at the Wall Street Journal to have funneled $700 million from a state-owned investment firm into his personal bank account, or bank accounts of close relatives.

The government also has a history of targeting political opposition groups and expanding its police and spying powers through special ‘national security’ laws.

(Gee, where have we seen that before…?)

So it’s not all cookies and candy over here. This place definitely has challenges, and I wouldn’t commit any serious investment capital here.

But it’s fair to say that foreign residents largely insulated from most of Malaysia’s domestic issues, so as a place to spend time, the cost vs. quality metric still warrants this place being on your radar.