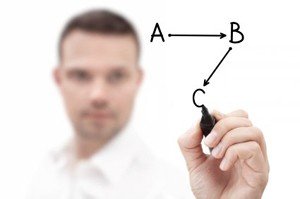 One of the best short-selling ideas I’ve had over the past year or so was in Fortescue Metals (FMG listed on the Australian Securities Exchange). If you’re unfamiliar with ‘shorting’ a stock, it’s essentially a bet that a company’s price will fall instead of rise.

But after extensive boots on the ground last year, I concluded that a slowdown in Chinese construction and steel demand was a near-certainty. Fortescue was a logical candidate to bear the full brunt of that.

Sure enough, over the past several months, this thesis came to fruition. With iron ore piling up at ports across China, spot prices of iron ore have plunged by more than 30%. Fortescue’s stock price fell even more… which means that anyone who shorted the stock made money.

Oh, there’s one more problem. In addition to a slowdown in China, the company has financed its growing expansion with borrowed money. Indeed, Fortescue has taken on so much debt that with spot iron ore prices below $100 per ton, the company couldn’t even pay the interest bill.

So, with his company deep in debt, what did the founder and chairman do? Why, he BORROWED EVEN MORE MONEY, of course. The company this week announced a new $4.5 billion financing package from JP Morgan and Credit Suisse.

As of June 30th, Fortescue already had total debts of $10.4 billion. In August it added $1.5 billion, lifting its total borrowing to $11.9 billion. With the new capacity, the company will add nearly a billion dollars of net debt, taking the total to $12.8 billion.

It seems obvious to most people that you cannot borrow your way out of debt. Yet for some reason, all over the world, from companies such as Fortescue, to nearly every Western government, that’s exactly what is going on.

The accepted wisdom is to borrow more, extend the payback period for your loans, and pretend there’s no problem paying them back.

What’s really crazy is that the market is comfortable with this arrangement– Fortescue’s shares recently surged nearly 20% after this latest Houdini act.  This is like assuming that a terminal patient is going to recover just because you give him another shot of morphine.

Treating the SYMPTOMS is the easy way out… but it fixes nothing. It’s clear the world needs people willing to address the underlying CAUSES of the challenges we face.

Unfortunately, there are very few of those people on the horizon. This ‘extend and pretend’ strategy seems to dominate all financial thinking.

Consequently, just as short-selling Fortescue on this recent bounce will still likely to prove to be a profitable strategy in the long run, betting on the eventual collapse of our over-stretched fiat money system still seems to be the right play.