It was a nice enough place… about 1500 square feet, 3 bedrooms, nicely furnished, and even had a sliver of an ocean view. Best of all, it wasn’t in gringo-ville.

“How much rent are they asking?” I posed to the real estate agent who was fawning closely on my heels. He reeked of tobacco and his alligator skin shoes still seemed to breathing.

Pausing for a moment to review his mental inventory, he said “Oh… I think about fifteen hundred… you know, it used to rent for $2,000 per month.”

My reply was terse but I have little patience for pie-in-the-sky valuations. $1500 / month for a class 2 neighborhood in Panama is not good value compared to just about everywhere else on the planet.

I have been coming here for about 7 years and remember the days of $50,000 condos that rented for $350/month. It wasn’t that long ago.

As I wrote on Tuesday, I am intensely bullish on the future of Panama as Latin America’s de facto capital city. But in the most recent 2004-2006 boom, real estate prices appreciated far too quickly… and while the rest of the world has given back most of those gains, prices have not capitulated in Panama, at least publicly.

A few years ago, waves of gringos were signing contracts for off-plan condominium projects, and just about everyone bought several units at a time.

Financed with a seemingly endless supply of Colombian and Venezuelan money sitting in the banks, Panamanian developers built tower after tower, and contract prices were bid up to dizzying heights.

As the first waves of condo towers were nearing completion, though, the market was already starting to fall. Simply, there were not enough end users wanting to purchase a finished condo in Panama to fill all the available supply.

A couple of things happened as a result:

1) Once the buildings’ occupancy permits were issued, condo developers started demanding final payment. Many of the original contract buyers couldn’t come up with the money to close and had to walk away from their down payments.

2) Those who could come up with the money to close took possession of the unit and immediately put it up for sale or rent, flooding the market with excess inventory.

As there is no centralized multiple listing service in Panama, there are no statistics to tell if inventory is actually selling, and at what price. If you ask a real estate agent, most of them will tell you that everything is great and business is booming.

This is utter nonsense.

The reality is that, in most cases, Panama is a buyer’s market. Sellers and agents, however, have not yet capitulated on advertised asking prices in the way that we have seen in other markets around the world– Punta del Este, London, Auckland.

They think there is always going to be some stupid gringo who is willing to pay full price, or thinks he is getting a good deal by negotiating a 10% discount.

This is why I am constantly probing the market, looking at properties like the one above and making lowball offers to see how far off the asking price a seller/owner is willing to come. 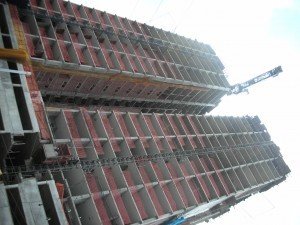 The buildings are now finished, but mostly empty...

Patience is the name of the game. I usually put my offer on the table and say “call me when you’re interested.” They always call. It’s simply a matter of when. Sometimes it takes them a few weeks to realize that no one else is knocking, but they eventually realize it.

My results indicate that a 33% haircut off the top is achievable if you’re willing to wait.