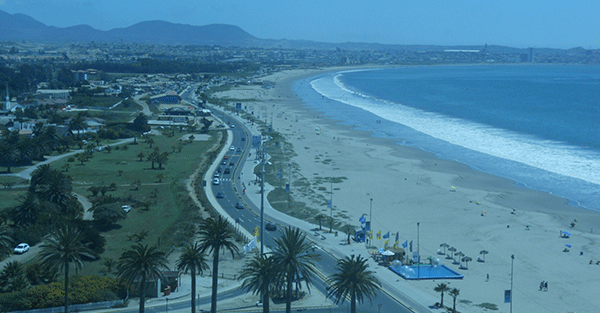 One of the things that I hear about all the time from subscribers is, “Simon- you go to so many places around the world and hardly ever post a photograph.”

You’re right… it’s entirely my fault. I seldom tote a camera around with me, and when I do, I’m probably the world’s worst photographer– but it’s certainly a reasonable request, and I’ll commit to doing a better job for you about this in an effort to share a bit more about what I’m seeing on the ground.

Today I’m posting a snapshot from my hotel balcony in La Serena where I just spent the last several days. As I mentioned yesterday, La Serena is about an hour’s flight north of Santiago on the coast– it reminds me of a mini-Rio de Janeiro… or perhaps Punta del Este, except without all the thong-clad Argentines and Brazilians.

With that, let’s move on to this week’s questions. First, Dominic in New York City asks, “Simon- I know you’ve addressed this before, but what do you make of the US-Panama tax information exchange agreement… is Panama still a good place to bank offshore?”

Great question. Banking in Panama was always a bit cumbersome– banks overregulated themselves to make up for the fact that Panama was on the OECD gray list, and depositors traded this inconvenience for the security of knowing that they were banking with legal privacy.

Now that this privacy is gone, Panama’s banking system will have to stand against regional competitors in an apples-to-apples comparison. In my opinion, Panama as a banking jurisdiction no longer has an advantage over Belize or the Caribbean– it’s simply not worth the extra hassle to bank in Panama, especially for US citizens.

As a place to live, however, Panama still has some merit, but we can talk about that another time.

Next, Anthony in London asks, “Simon, I’m graduating from university soon and realize there is nothing in the job market that will be waiting for me here. Instead of staying at home with my parents and waiting for the situation to improve, I’m going to find my own opportunity. What country in southern Africa do you think has the best potential?”

Congratulations on making this decision, I really admire the independent thinking. For southern Africa, I really like Tanzania and think that it has enormous potential. It is a mostly agrarian country of 40 million, and it has plenty of natural resource wealth, including gold, natural gas, uranium, and iron.

As such, it has captured the attention of the Chinese– Tanzania is crawling with Chinese companies who have invested heavily in the country. Westerners are a bit late to the party, but I think there is still a lot of opportunity because, despite its growth, potential, and resource wealth, Tanzania still has a lot of problems.

Namely, the country’s electrical grid is heavily stressed… the existing capacity cannot keep up with the economic growth, and I think there is a lot of opportunity to present scalable alternative energy solutions that can be implemented quickly.

There are also opportunities to develop the tourism sector. Tanzania is already home to Zanzibar, Kilimanjaro, and the Serengeti, though the capital city of Dar Es Salaam is definitely lacking in its tourism infrastructure. This is something that the city is trying to address, but it lacks the vision and expertise.

For young people, Tanzania is dirt cheap (the largest banknote is worth about $6), and it’s a lot of fun. One of the most… unique… nightclubs I’ve ever been to in the world is in Dar Es Salaam, and there’s a really great expat scene there.

Next, Stephanie in Vancouver asks, “Simon, I own a growing technology business with several partners and we’ve been considering an IPO to raise capital in the public markets. Where do you think is the best/easiest place to take a company public?”

I would say Hong Kong… you need to go where the money is, and that’s Asia right now. Hong Kong is doubly blessed because, in addition to local wealth and funds, rich mainlanders all have accounts there as well… so in a way you get access to capital from both China and Hong Kong.

The regulatory environment is simple and transparent, especially for small listings. I have a great relationship with a firm there that is a one-stop shop for taking companies public, from the books and audits to the regulatory filings and underwriting. The entire process is quite fast.

Hong Kong also has one of the lowest corporate tax rates in the world, and the government recently planned a huge incentive for debt issuances (often a preferred alternative to selling equity) whereby under certain qualifications, the government is offering a 50% to 100% tax concession for debt maturities longer than 3-years.

Last, Chris in Green Bay says, “Simon- I’m really working hard on getting a second passport. I’m of Polish ancestry, but the consulate in Chicago has been less than helpful. I’ve read about an ‘instant citizenship’ program in Surinam for about 20,000 euros and am thinking about doing this just to have something now. Your thoughts?”

Fortunately you don’t need to worry about that. Polish ancestry is easy to prove, and with evidence, you can obtain a passport very quickly.

A few months ago I recommended a group I know called CK Law Office in Warsaw– they speak English and can take care everything for you for about $1,000. Several subscribers have used their services and have now obtained a Polish passport.