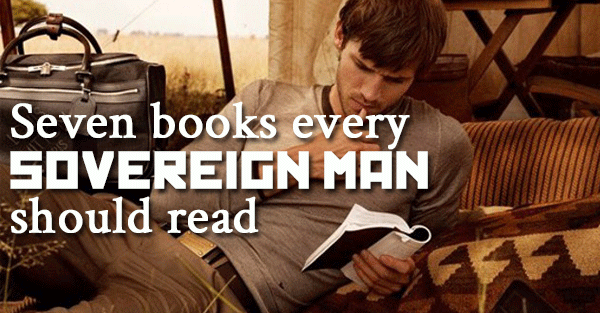 Being a sovereign man is not just about diversifying and internationalizing your assets across national borders.

It’s as much about your mindset and the way you view the world and the events that are happening around you.

Your worldview is heavily dependent on the knowledge and ideas that you are exposed to, but as demonstrated some people don’t want to learn, neither from books nor from history.

Is it surprising that the economy is on the brink of collapse when he and so called leading economists have based their whole worldview on faulty Keynesian economic theories?

The consequences might be surprising to them, but not to us, because we know better. We’ve learned from history.

Albert Einstein said, that “any man who reads too much and uses his own brain too little falls into lazy habits of thinking,” but to make the best use of your brain it helps first having an accurate understanding of reality, and of where the world is heading.

So to that end, here are some books to get you started:

The Road to Serfdom

by Friedrich A. Hayek

The Godfather of the Austrian School of economics, Hayek explains the vitality and necessity of economic freedom better than anything else I’ve read.

Read/Download for free at the Mises Institute

This book teaches you the basic principles of reward being in proportion to the value you add to other people’s lives. It also helps you to step out of the victim frame and start to realize that nobody else owes you a goddamn thing and you have to build/contribute something that other people want before you have a claim to anything.

Anatomy of the State

You might have heard me mention the concept of reducing your sovereign risk before, i.e. not trusting any one government with your money or your safety. When you diversify to protect yourself against the state, it helps first knowing the true nature of the state. This book will help you with that.

The state is not the same as society, and the state is certainly not “we.” As the book description says, Murray shows “how the state wrecks freedom, destroys civilization, and threatens all lives and property and social well being.”

Read/Download for free at the Mises Institute

Jim– one of the speakers at our event down here in Chile this
weekend, is the only person I know who has traveled to more places
than I have.

And in his world travels putting boots on the ground, Jim developed
first-hand insights that took other investors at least 10-years to
realize… from China’s rise to Mongolia’s potential to the toxic
destruction of the euro.

Jim’s book is a must-read for anyone who is looking to do business and
invest worldwide.

Great book that discusses the absurdity of the fiat experiment, why it will fail, and what governments around the world are likely going to do next to keep the party going (plus why this is destructive)

And if you want to learn more about what sound money really is, then here’s a bonus tip for you: What Has Government Done To Our Money by Murray Rothbard (free download via Mises Institute)

Daemon and then Freedom (the sequel)

Fiction. Amazing story. I don’t want to spoil it, but you won’t want to put it down. These books really helped shape my view of resilience and system dependency.

Some concepts you’ll learn about are decentralization, drones, dark nets, cryptography, augmented reality, self-sufficiency, and other concepts relevant for a resilient future.

“The man who does not read has no advantage over the man who cannot read.” ― Mark Twain