Singapore bank to Uncle Sam: ‘Stick it where the sun don’t shine…’ 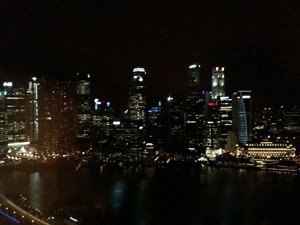 The HIRE Act was originally drafted in the early days of the post-Lehman crisis. Official unemployment (before they just stopped counting people) was the highest in decades, and politicians had to ‘do something’ to get the economy moving.

Of course, what better way to boost the economy than to pass more laws? It’s genius!

HIRE ended up being a bunch of bizarre tax rules and pet infrastructure projects… the usual stuff. Of course, they have to pretend to pay for all of this. So they invented FATCA, which stands for ‘Foreign Account Tax Compliance Act’.

(1) All US taxpayers must annually disclose foreign financial accounts to the IRS if the values exceed a particular threshold (starting at $50,000). This requirement began last year.

(2) All foreign banks must enter into a blanket information sharing agreement with the IRS. If they don’t, the banks are subject to a 30% withholding penalty on US-sourced funds.

Then there’s the Dodd-Frank legislation… over 2,000 pages of unmitigated economic destruction which makes it tremendously difficult for foreigners to do business in the United States, or with US citizens.

The rules which were proposed in Dodd-Frank are so obtusely complicated, nobody can begin to understand them. Even the agencies which are responsible for implementing Dodd-Frank have continually missed their own deadlines because they don’t understand the law.

Understandably, foreign banks have been in turmoil over the last two years as a result of all this legislation. Nobody wants to crawl in bed with the US government, and some banks have taken action by shuttering US citizens’ accounts. Americans are even being dumped from foreign corporate boards.

Yet just yesterday, DBS Bank in Singapore stood up to the US government, indicating that they would not be registering with US authorities for at least for one Dodd Frank provision pertaining to swaps. Nordea Bank in Sweden made a similar statement.

This is an interesting turn of events which could evidence a bigger trend.

We’ve already been seeing signs that US financial influence is waning. The dollar is being slowly displaced in international markets. Countries around the world are starting to increase their reserves of China’s renminbi, as well as accept renminbi in international trade settlements.

All of that used to be dominated by the dollar. But now the dollar’s share is gradually fading.

If more banks follow DBS and Nordea in standing up to the US government, it will be the clearest sign yet that this trend is taking hold… perhaps accelerating the dollar’s decline.

What does this mean for us?

1) If you earn income in US dollars, make sure you’re holding your savings in another currency, precious metals, or productive assets.

2) If the trend holds, it’s about to get a lot easier for US citizens to diversify internationally and do business abroad. In fact, I’m already seeing encouraging signs of this in Singapore. More to follow on that.

Quick reminder, the enrolment window to become a subscriber to the 4th Pillar investment alert service closes at 11:59pm TONIGHT. I’ve mentioned this a few times already, so no need to restate it here.

I did ask Tim to put together a list of answers to the most Frequently Asked Questions we’ve received about the service.  You can read his no-nonsense FAQ by clicking here. If nothing else, it’s a good idea to check out just to familiarize yourself with the strategy.